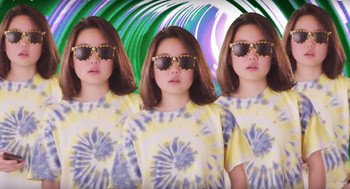 Does the success of Superorganism represent the death of popular music? On close inspection the songs are only a step or two away from being generated by software using a couple of cheap synths, some vocal loops and a Linndrum. Or have they cracked a secret futuristic musical code seemingly without any effort?

Superorganism soft-launched the song “Something for your M.I.N.D” in February of 2017, the first version was scrubbed and replaced once an “uncleared” sample was discovered and removed. The band – a loosely gathered collection of musicians and artists from various countries who are mostly stabled in East London – ship Garageband files to one another and Skype their collective collaborative feedback and media interviews. The lead vocalist, Orono Noguchi from Japan, is the youngest member (now only 17) of the band whose ages range from the teens to the 30’s. She met some of the originating members when she was fifteen and they were touring as the Eversons in Japan. The band asked her to submit lyrics and vocals over the internet to a new track and Superorganism became an eight-piece band. The band’s members hail from around the globe, and besides lead vocalist Noguchi, include Emily, Harry, Tucan, Robert Strange, Ruby, B, and Soul.  Soul, the eighth member of the band originally from South Korea now lives in Sydney Australia, joining the band physically when they tour. Their first album, named Superorganism was released earlier this year in March.

While the seemingly chaotic writing and performing process should result in a boulliabase of sounds and effects, the tracks have propelled the band into a media frenzy of adoration of their danceable affectations and faux naïve singing.  The lyrics are inoffensive and apolitical, and the musical content is generally aural toothpaste. If you isolate any of the instruments or voices – you’ll discover that the timbre and performance choices are all insipid and generally the least exciting sonic selections of synthesizers, direct-injected single coil guitars and badly tuned drums.  The vocal performances are what most producers would reject as tracking examples to be replaced by real singing at a later time. And yet their monthly Spotify streams are in the six-figure range monthly and live dates sell out. The acoustic result is a Jackson Pollock’ed  throw samples and figures to the wall – see what sticks and repeat discernable vocal loops in order to render it into “pop” music – the lo-fi aspect worked brilliantly for Beck when he came out with “Loser” but for Superorganism it eventually becomes exhausting in its lack of emotion. Their live set is enhanced by the presence of four young women lackadaisically playing tambourines and singing background vocals. If you put the tempo and groove up on a digital screen (using Pro Tools or Logic) to explore it – you’d find the beat or the meter has been squished and stretched in both directions – late and early in a manner that makes the music essentially unthreatening and as far away from the masculine metal machine tempos as possible. If it were more quantized they would drift into EMD and lose what charm they have.

Taking off from where the Gorrilaz trailed through the musical undergrowth, Superorganism will doubtless generate a blur of musical acolytes and followers who will eventually become a blurred mass of digital blips and breathy vocals until a new trend will arise and chew up the popular musical landscape all over again.