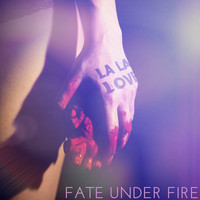 Top shelf pop like this is more and more difficult to find. Fate Under Fire are definitely filling a glaring gap in the modern music scene, but their talents are such that they’d likely continue standing out from the pack even if it the field were far more crowded. “La La Love” is the latest single from this Sacramento, California based four piece and singer/songwriter David James uses the band as more than just a vehicle for himself – they play as a genuine unit from the first and never sound likes some sort of glorified solo act. It’s to the band’s credit that they manage to capture a strong physical sound without ever relying on standard tropes for a band configuration of this sort – there’s no over-abundance of guitars, no thunderous rhythm section wailing away, but instead there’s melodic strength and recording virtues that capture the four piece in full flight from the outset.

There’s some backing vocals accompanying James, but the bulk of the song’s singing falls on him and James acquits himself wonderfully. His voice is perfect match for the slightly theatrical, cinematic feel of this material, but it works like the arrangement does in the way that neither are ever particularly overwrought but, instead, manage an artful balance between feeling and restraint. He does a great job of giving the lyrics real urgency and, like any good singer should be able to do, he takes some serviceable and strong words and manages to elevate them into the realm of simple, performed poetry by virtue of his voice alone. He particularly hits his stride with the song’s chorus, but the same steady hand distinguishing the remainder of his performance remains in full force during these passages. His comparative youth is no obstacle for him to deliver an impressive and deeply felt performance still capable of entertaining a wide audience of listeners.

The musical arrangement is equally entertaining and really excels thanks to the bass playing and drumming. It’s a signature element of the band’s style to build much of their songwriting around hard-hitting, powerfully rhythmic drums and this song represents the ultimate refinement of that method thus far. Synthesizers lead the way in much the same manner we would have usually associated with the typical pop rock tune. Make no mistake, Fate Under Fire do make use of guitar, but it’s strictly a supporting instrument here rather than one leading the way for audiences and the band alike. The song runs a little over three minutes, but it encompasses a packed musical universe in that limited time and is sure to leave listeners satisfied. Fate Under Fire’s “La La Love” is a compelling pop gem from the opening seconds onward and it has the feel of a young band reaching the first of what promises to be many peaks to come. It’s one of the best single releases you’ll hear this year.