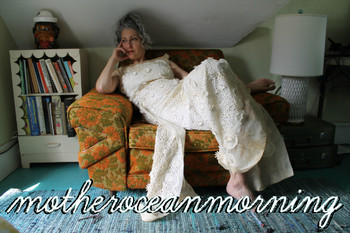 After a virtual silence of nearly 20 years, influential indie singer/songwriter Lida Husik will release her tenth solo album on Friday, June 8th – a date many assumed would never arrive. Entitled motheroceanmorning, the highly personal collection of original songs is stripped down and acoustic in nature, a notable departure from Husik’s previous journeys into psychedelia, alternative rock, eclectic power pop, and electronica. The album’s lead-off single is the sweetly melodic – yet unabashedly antagonistic – Do Me Right.

Prior to motheroceanmorning, Husik’s solo discography spanned from 1991 to 1999, with styles and genres shifting at her pleasure. If there’s one burden Husik bared, it stemmed from often being a few steps ahead of her time. Husik’s 1991 debut Bozo and its near-immediate follow ups Your Bag and The Return of Red Emma helped pioneer the alt-rock, post-feminist singer-songwriter movement later popularized by artists like PJ Harvey and Liz Phair. Numerous tracks from Husik’s late 1990s releases Faith In Space and Mad Flavor would sound right at home on Grimes’ groundbreaking Visions, an album released nearly a decade and a half later.

Recently, two seismic shifts brought Husik out of her 20-year musical seclusion: one external, the other internal. The external shift was born of intense political frustration. “I was reacting to our national disaster,” Husik says, referencing the dramatic free-fall of America’s leadership and moral compass. (Her anger and anxiety are on full display with tracks like Million Years and the blues-drenched Red Man.)