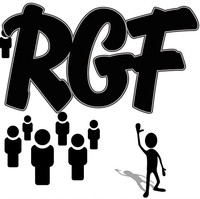 Many renowned and talented musicians are out there, but only a few can deliver a powerful and meaningful message and resonate an immense energizing mood across their music. RGF stands among this type of musicians who pours some kind of message into their passionate and exuberant music, leaving for the audience to unfold.

Their newly released single, “Blue Angel”, from the album “RGF”, evokes the feeling of hell and chaos, untamed and excitement from the very first opening. But, the song has some kind of power that one cannot pause or make it stop. Besides being chaotic and exciting at once, “Blue Angel” is bringing forth a classic, carefree mood, wrapped up with a punk-rock sound.

The moment the enthusiast listener press the play button for “Blue Angel”, he will feel the hard-hitting into his ears with a blast of the sound of drumming, fiery and explosive guitar riff, rowdy and passionate vocals.

It seems like the song will engulf the listener with the relentless energy it is producing. But, in the middle of musical turmoil, and exuberant passion, there is the magical and magnetic lyrical presentation that will certainly make the mind of the listener nostalgic.Americans like rebels, and ”Blue Angel” has an honest, rebellious and inspiring tone, electrifying through its lyrics.

Talking about the melody, RGF attributes “Blue Angel” with a joyous tone of melody. There is no doubt that the musical composition has grit, some sort of distortion with the heavy drum line, vocal, guitar notes, etc. But inside the verses of the song, there lies something inspiring, hopeful, heavenly, angelic about the music, the sound, and of course, the song. “Blue Angel” is, in fact, an unusual fusion of chaos and innocence that will make you fall for this song, as it progresses.

From the second repetition, the sound will become interpretable, and the listener will find it as a comfortable piece of musical expression. The song will scream out on the behalf of the audience, letting out those intense and unexpressed emotions burst out in a glorious and satisfying way. The guitar riffs, the constant movement in melody, the passion reflecting through the leading vocal, the energy in the rhythm, all of them are showcasing the passion of RGF for music and zeal for musical creativities.

With the progression of the song, there is a mention of bringing a knife to a gun fight, and with this mentioning, the sentimentality grows stronger and stronger, spreading its roots in the mind. With this assertion, the intensity of the track accelerates to the core of the soul of the audience faster than ever before. The musical crafting seems to cast a spell around you, offering an unsurpassable soundscape.

“Blue Angel” is a crucial part of “RGF”, the self-titled musical collection of the band RGF. “Blue Angel” is a wonderful and stunning piece of creation, evoking dynamic energy and the originality of RGF. The song is worth to listen, not for one time, but for several times.