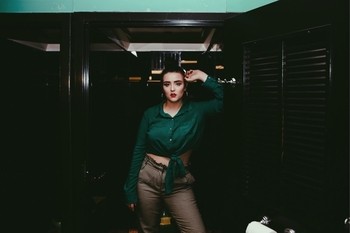 Her first single under her new moniker, indie pop artist Dearly, previously known as Amanda Jones, has dropped her debut single “Get With You Alone’ (produced by Caleb Turman and Austin Bello), out TODAY. A seamless blend of mainstream indie and soulful pop, “Get With You Alone” is the perfect representation of Dearly’s rebrand, which was announced on social media just last week. A seasoned pop veteran, vocalist Amanda Jones made the choice to shift gears and bring forth her most authentic artistry through the stage name Dearly. The melancholy pop track “Get With You Alone,” while sad, has a rhythmic backbeat, highlighting Dearly’s two biggest strong suits: crafting a catchy pop tune and maintaining personability. About the rebrand, Dearly states:

“I’ve struggled this past year with depression and anxiety, and writing has been one of the most helpful tools in pulling myself out of a funk and doing my best to THRIVE. Some days are still a challenge, but through expressing myself and creating I have really made leaps and bounds towards being being happy and loving myself- for everything that I am.”

23 year old velvet-obsessed indie pop artist Dearly wanted to adopt a stage moniker that encompassed every facet of her artistry; someone sincere, open, and deeply invested in her art. Inspired greatly by her interpersonal relationships, Dearly (previously known as Amanda Jones), promises a slick combination of dreamy vocal melodies and groovy baselines, her own personal artistic equation. Although well-seasoned in the music industry, having gone by her birth name on stage for many years prior, Dearly is approaching this new era rather personally, with a clear-cut indie-based vision showcased in her debut single “Get With You Alone.” Out 5/18, the track showcases her first dip into a candid style that is unapologetically her.