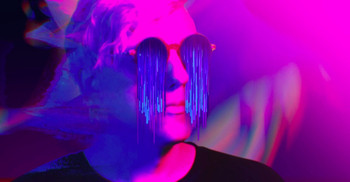 Today, Robert DeLong unveils the video for his current single “Favorite Color is Blue” ft. K.Flay (WATCH HERE), which is Top 15 at Alternative radio and close to 5 million streams worldwide. The video was shot by ground-breaking producer Dmitry Tokoyakov and director Evgenia Strukova who have done animation work on the Oscar-winning film, The Revenant, as well as directed videos for Selena Gomez, Imagine Dragons and more. The video was shot in Texas while DeLong was on the road with K.Flay.

Robert DeLong said, “This video was one of the few times where something felt totally right after the first draft, which is saying something. Dmitry seemed to have a fully fleshed out vision that aligned perfectly with some of my favorite visual tastes – surreal animation, high-contrast distinct color schemes, datamoshing, pixel-sorting, and glitch. The experience was quite a unique one, in that K.Flay and I were set up with a seemingly arbitrary set of instructions for what needed to be filmed in front of a green-screen, and had to trust that Dmitry and his Russian team were going to deliver something coherent from what was captured. I am so excited to release this music video – I feel like it is a visual trip that is going to blow some minds!”

Most recently, his 2015 sophomore album, In The Cards, yielded a string of fan favorite singles such as “Don’t Wait Up” and the smash “Long Way Down”—which peaked at #3 on the Alternative Chart, clocked over 30 million Spotify streams in addition to 3 million YouTube/VEVO views and counting. The record garnered acclaim from Billboard, Baeble Music, iHeart.com, and more.