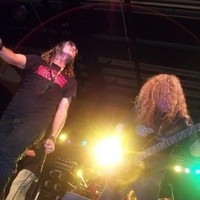 “Shades of Gray” is the latest single from North Florida’s Aunt Stella’s Ashes, the latest project in front man Tim Schichtel’s long history with bands in the North Florida rock scene. This project has the potential to be the most successful yet for Schichtel thanks, in no small part, to his continuing collaboration with band members he’s worked with in some form for years, including guitarist Kevin Smerdon and drummer Pat Schiavo. Schichtel, Smerdon, and Schiavo rounded out the lineup with second guitarist Dano Spangler in 2013 and bassist Mike Mancuso in 2010. The band, since then, has scored plum opening slots for acts like Blue Oyster Cult, Adler’s Appetite, and Quiet Riot, among others. They are obviously becoming more and more polished with each new effort and “Shades of Gray” may be their most accomplished effort yet.

The core of the band is, undoubtedly, Schichtel, Smerdon, and Schiavo thanks to their past collaboration, but Aunt Stella’s Ashes has an impressive sound from the first that sounds like the band has been playing together twenty years or more. Schichtel’s beginnings as a guitar player gives him an unique knowledge for how to lock his voice around a guitar riff and play to its sound rather than competing against it, but the mix of Smerdon and Spangler’s guitar work gives Aunt Stella’s Ashes considerable punch that must be inspiring for him to work with as a singer. There’s no straining for effect in their attempt to convince us of their hard rock bonafides; “Shades of Gray” has a natural swagger from the first and a purpose behind every note that never sounds forced. The enormous rhythm section, a critical building block in this song, never plods forward without any spark; instead, they are popping from the first and light a fire in the band’s engine room that sustains the song’s tension throughout.

Schichtel’s singing has a seething quality from the first that nearly explodes, but never quite does. This moodiness at the heart of his vocal helps sharpen the song’s edge without ever coming off as melodramatic or overly theatrical. The song doesn’t have a traditional chorus, per se, but his attentiveness to the lyric enhances the performance overall and he shows great care with how he hits the song’s payoff lines without ever sounding overwrought or out of place in the overall song. “Shades of Gray” gives him strong words to work with as well, nothing that rewrites the possibilities of such content in rock music, but lyrics that further illustrate how Aunt Stella’s Ashes can touch on familiar themes and subjects with a style all their own. “Shades of Gray” is a fantastic new single from this North Florida outfit and there’s no question they are maintaining the needed momentum with this song for spreading their reputation out further than before. Aunt Stella’s Ashes renown will only grow with music this good.