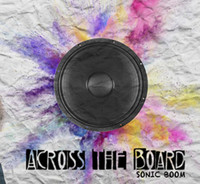 I think this may be one of the more potentially under the radar gems I’ve heard in recent years and, based on its merits, deserves remembering at the end of the year when people start compiling best of lists for the year. Across the Board’s second full length studio recording Sonic Boom ups the creative ante for this Canadian band led by singer/musician/writer Jacqueline Auguste and bassist Andy Ramjattan without ever falling into painful self-indulgence. The eight songs aspire to nothing else than rock opera status and does, indeed, present an unified theme rather than a conventional story – the album’s songs concern themselves, in large part, with what aspiring musicians must do in order to really break big in the musical world and the associated pearls and pitfalls of those sacrifices. It isn’t, thankfully, a whiny album, but smartly written and dispenses with any sideshows. Across the Board know how to put on a musical show for their audience and make them think as well – an increasingly rare combination these days.

The title song introduces the album’s story and themes in a big way and with the sort of cinematic compositional style that defines Across the Board’s work at its most imaginative. Have no doubt, however – they are more than capable of flexing their rock muscles whenever they like, but have the good sense to modulate their approach. I appreciate how this song ties various strands of their sound together into a more colorful whole and the interplay between its occasional backing vocals and Auguste’s confident and wide-ranging lead vocal is a particular highlight. “Back to the Tracks” is another tune directly culled from the band’s experience as native Canadians and built around a tastefully dramatic musical arrangement. I enjoyed hearing the careful “stepping up” of intensity that pays off with a compelling peak. Auguste’s lyrical content is quite fine with this number.

One of the more textured compositions on Sonic Boom comes with the song “It Shouldn’t Be This Hard”, a disappointed and embittered reflection on the music industry’s dishonesty, but Across the Board frame their reflections in an arrangement with dynamic interplay and a strong acoustic guitar and rhythm section spine holding everything upright. I’m not a fan of showboat moments, but the instrumental break in this tune is nothing like that – instead, the brief guitar solo works as a memorable transition into the song’s final lap.

The intimacy of “No Curtain Call” elicits Auguste’s best vocal and its acoustic setting is highlighted by a stellar guitar performance courtesy of Ben Healey. It’s definitely an autobiographical lyric and you don’t have to possess a past of playing in bands to appreciate its sentiment. Another high point of Sonic Boom arrives with the band’s cover of a Bono/The Edge penned track entitled “Kite”. You can definitely hear a smattering of the songwriter’s influence in the song’s sound, but Across the Board does something very much their own with this tune and it never embraces imitation. The album’s closer “Two Step” brings Sonic Boom to a memorable close with a guitar rock barnburner, but melody and strong vocals always remains in the picture. Across the Board are definitely making a bid for widespread recognition with this album and it will likely net them their goal.