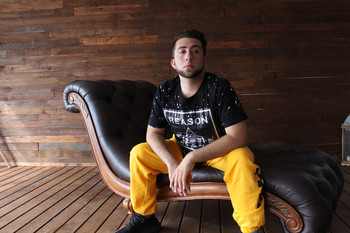 Great art is great pain, and love can sometimes be straight misery. Yes, these are common themes in rhythm and blues, but not so common that you don’t appreciate a good breakup story when you hear one. On “Don’t Wait” the debut single from Mikey See (now available on Spotify and for digital download), heartache and soulful crooning take on a new life and bring a new wave of positivity with them. Although he hasn’t released a full LP yet, his new single “Don’t Wait” is making a big splash within the L.A. singer/songwriter scene.

Even though he is an accomplished and out spoken activist, champion of the LGBTQ community, and constantly proves all of the bullies and bad guys wrong with his successes, Mikey isn’t trying to sell you an agenda. Mikey is singing good, classic music for a sad, disgracefully non-empathetic world where people often get hurt just trying to love one another. And this is as life-affirming as it is soul-searching.

Often pop music runs the thin line between catharsis and ambiguity, but “Don’t Wait” seems to avoid being full of itself, even with its clubby bravado. Our singer doesn’t have to bark for us to feel his bite, and if you can’t quite place what genre Mikey See is going for, maybe examine his personal description of his sound, as told to Vents Magazine; “Pop R&B with a hint of soul… so if Post Malone and Somo had a baby…that could be me.”

He later goes on to describe his perception of the southern California music scene; “I mean… It’s Los Angeles, the city of angels, a city of dreams and hope. This is where people come to make it. The music scene is so on point.

Whether it’s sold out shows at the Staples Center, Monday’s at School Night at Bardot, or these secret shows at places like Hotel Café, No Name Room, or Peppermint Club. There are legendary venues with so much history, how can the scene not be killer.” It’s hard to believe this hip and articulate 20 year old has struggled with social anxiety throughout his life.

In the lyrics of “Don’t Wait” (“I was right there/Through the struggle, the pain/I will not be forgotten/I will always be there for you”) Mikey broods and pushes through one emotional challenge after another, using past pains as a shield of pride, a source of I doubt this will be the last we hear from Mikey See, who promises much more in store for fans this coming summer. (Mikey See is on Facebook, Instagram and Twitter, and fans can learn more about his artistry and story at mikeysee.com)