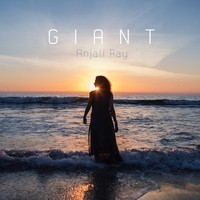 Giant – The new EP, by Anjali Ray, shows a different side of the artist, as the opening track explores. The Illinois native was raised in Dew Delhi, India, until the age of 10, and is now working in Chicago and Los Angeles. She stays in tune with her roots by practicing Hundustani classical singing. Anjali Ray is also a jazz musician with pop influences such as Sade and Sara Bareilles, which makes for an alternative pop style on her latest release. It comes with five amazing tracks which serve as a natural progression from her previous album release “Indigo.” Giant is an EP that takes her music to the next level.

Ray’s voice is one to absolutely die for, especially if you like jazz style singing over infectious pop melodies. She makes the combo work with the best singers of her stature, and that’s a testament to her efforts. The EP kicks off with “Different Side Of Me,” which is instantaneously memorable and vastly enjoyable for just about any audience that hears it. You want quality when it comes to pop, just as you do when it comes to jazz, and the opening track wins that hands down. It deals with the different sides Ray has-to show, with a perfect set of lyrics to compliment the impressive backing track with her killer vocals.

“Giant” follows with the title track and a complete different vibe with some of the best vocals this side of Sarah McLachlan. But there’s a strong difference of her own that she brings with just as much eloquence or more than her influences. This is a massively epic track that it would take deaf ears to fall on, to not acknowledge how magnificent it is. It’s also very impressive how this colossal track is mixed down to single playing time, because it still plays like an eight- minute song. It’s as remarkably well written, produced and arranged, as it is vocally and musically stunning. The EP comes recommended for it.

It’s hard to believe so much can be packed into songs that play longer than their running time, like narrowing huge pieces down to a pop sensible finish that never quits. “Illicit” is a prime example of that crafty ability she was born with. This is a naturally gifted singer, no matter how well trained, and her voice goes to the ends of the earth on this track. Feel the soul in her voice as she weaves in and out of the arrangement like sultry silk. There is no mistaking the premiere quality of this cut, it brings out the best in her voice and leaves the rest up to the beautiful music.

“Marionette” is where Ray’s east meets west side comes out and washes the soul with a sound like no other. The percussive nature of the music is what drives the tune but eventually the vocals come alive and dominate the song like only she can, which tops off the epic groove. It goes-to show that this EP gets better with every last-note as it makes way to the final track. “Where’s The Heart” takes this EP out with a softly sung easy-listening track that renders this no-filler release a masterpiece in its own right, by a masterful singer and musician that must be heard by the masses.