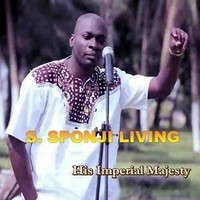 From Ivory Coast, Africa S.Sponji Linving is giving us those beach vibes and spreading his love all around with his new track “I love you”. Ivory Coast it’s known for its beautiful touristic complexes consisting basically on beaches, jungles and paradisiacal landscapes. An all tropical flow and S. Spongi let it show on his music.

The song has a reggae-like sound with some chilly vibes from dancehall too; also it has a surprising latino break moment with a little rap in Spanish, saying words of love and little pick up lines to just to add an extra spice to this well thought mixture between musical forms, it’s a clear display of a very rich cultural heritage which makes it even more beautiful and fresh to hear. I also recommend on putting special attention to the guitar, that was a master work. There’s nothing that I could say against this song, since it’s something I really enjoy to hear and many of you will enjoy too if you like hearing world music.

The lyric of this song is very lovely, without necessarily being sickeningly sweet, it’s just the adequate amount of sugar everybody needs to sweeten your whole day, I feel this is the perfect song to dedicate to that significant one because you want that person to know just how much you loved them, and it’s definitely an anthem for those who want to express and share those feelings.

S.Spongi Living was born in Ivory Coast in 1979 but it wasn’t until the year 2006 when he started his professional music career. That year he released a maxi single named ‘The one’ that would be the promotional for his first album that was published in 2007.

Two years later he would work with dPulse recording in US, Florida for his second album ‘Sun of justice’ that would be later distributed by a small division of New York Island DefJam names “Sunset records”. In 2010 he founded his own record label CBRLABELS in which he would be focusing for the next 7 years.

There are ten popular books under his name but he decided to make his big music comeback in January of 2018 with the track “L’Imperial” that would be published in collaboration with Tunecore INC and his own label CBRLABELS.

The track is part of the album ‘His Imperial Majesty’ that will be launched by SONY DADC in May 21 of this year. The album is said to contain mixture of sounds and musical form such as reggae, dancehall, hip-hop, additionally the album contains lyrics sung not only in English but also in French and Spanish.

Finally, I feel like the artwork for this album even though very humble and direct could make a little more justice to the great work that’s within it.