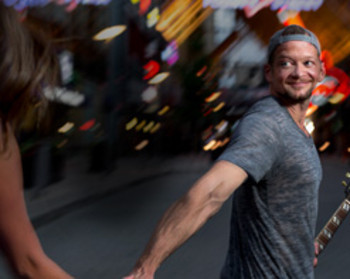 Though influenced by rock and roll, Bryan Fox is a country musician at heart. While he makes regular trips to Nashville and California to write and record music, this Louisville, Kentucky native spends his days in a different way… as a dentist! When he entered college, he had scholarship opportunities for trumpet and for academics; he chose to go the academic route and pursued music as a hobby. But when he got to dental school, he found himself in a recording studio with Hugo Ferreira (who is well known for being the lead singer of the American rock band Tantric), and the song they recorded (“Yes”) went #1 on WLRS (Louisville rock radio). Major record labels took attention just before the music industry crashed in the early 2000s, and while he’s not currently with a label, he’s maintained a drive to pursue music on a serious career level.

Bryan Fox first shared “I Saw My Ex-Wife Workin’ At The Bass Pro” on his 2010 album Big City Lights; six years later, in 2016, he released the album It’s Gonna Be That Kind of Night. When it came time to create a music video in early 2017, he dug into his whole catalog to find the song that would make the best visual, and quickly settled on “Bass Pro.” Fox spent several months trying to convince Bass Pro to let him film the video in their store, but when the corporate powers-that-be said no, he reworked the song as a parody – “I Saw My Ex-Wife Workin’ At The Bait Pro” – and set off to making the video.