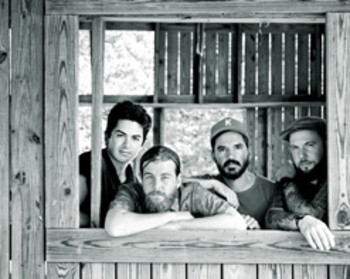 Singer and songwriter Patrick Keenan of The Winter Sounds understands the mind-altering potential of a trip to the deep woods. In the gorgeous, hallucinatory video for “Heartbeats”, the first single released from Maximum Reality, Keenan and filmmaker Zbanski Kino took the viewer on an unforgettable ride to the heart of the Estonian forests. That video drew favorable notice from the Huffington Post, Essentially Pop, Paste, AXS TV and other outlets, and firmly established The Winter Sounds as a group with a visual identity to match its imaginative music. Now, Keenan and Kino are back among the tall trees of Estonia for the follow-up clip for “Earth After A Thunderstorm” – but this time, they’re not alone. The singer is joined on his journey by a one-armed mannequin, who, over the course of this skillfully directed clip, just about comes to life.

That’s the sort of perceptual magic trick we’ve become accustomed to getting from The Winter Sounds, specialists in enchantment that they are. Maximum Reality, which is named for a concept in the philosophical writings of Immanuel Kant, is a heady, literary, tuneful, danceable, synth-draped exercise in modern pop-rock; the year is young, but it’s already one of 2018’s musical highlights. Produced by Derek Garten (Jewel) and Jason Kingsland (Band Of Horses, Deerhunter), the new set fully realizes the potential of the band’s prior three albums. The group has perfected its distinctive amalgam of folk, synthpop, dreampop, and classic rock, and Maximum Reality demonstrates both their versatility and their ability to draw unexpected connections between disparate sounds. “Earth After A Thunderstorm”, for instance, is more meditative than the propulsive “Heartbeats”, but both songs are cinematic, thoughtful, and wholly engrossing.