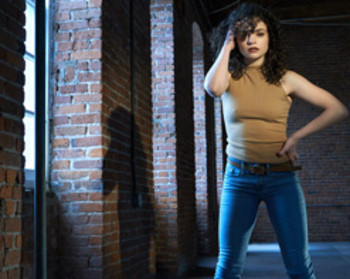 Carolyn Marie’s unstoppable drive and unparalleled enthusiasm has her gaining some much deserved critical acclaim in the music world. This New Jersey native has established a global fan-base with her glowing smile, bouncing curls, and trademark blend of pop, rock, and dance vibes. She a triple threat: Not only is she a magnificent songwriter and possesses a splendid, “force of nature’ voice, but she can dance circles around her competitors! Over and over again, singer/songwriter Carolyn Marie has proven herself to be a woman of extraordinary talent, bringing you yet another new, original, and edgy hit single in the form of “Man Eater.”

No stranger to hard work and success, Carolyn has had the pleasure of working with Grammy award winning producers Earl Cohen and Cooper Anderson, as well as multi-platinum Ken Lewis, and has been featured in iconic media outlets like J-14 Magazine, AXS TV, CelebMix, and the California Music Channel. Not only this, but as a HIP Video Promo favorite, our team has been singing along with Carolyn’s music for years, proudly presenting videos for raw, emotional ballads like “The Moment,” and upbeat, free spirited club hits like “Our Favorite Song.”

Stepping in a new direction, Carolyn’s new sultry video will make you eat your heart out. Directed by Daniel L. Maldonado, “Man Eater” begins with a casual encounter with a tall, dark, and handsome stranger and quickly intensifies from there. As he becomes mesmerized by our singer’s gaze, both this stranger and the audience are transported to a dark and mysterious setting. Alternating between spectacularly choreographed dance scenes and shots of Carolyn’s captivating musical performance, “Man Eater” will draw in it’s viewers just as she draws in her victim. This enthralling video, coupled with some wicked guitar riffs and a scary good beat will have you dancing along with our beloved female protagonist, and loving every minute of it.