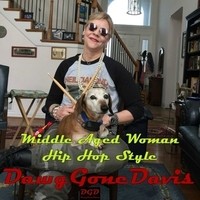 The playfulness driving Dawg Gone Davis’ “Middle Aged Woman Hip Hop Style” isn’t the single overriding factor making this song go, but it’s definitely a big part of what makes Rebecca Rogers Davis’ presentation fly for listeners. There’s underlying melodic value, however, to her performance that focusing on the comedic value of the piece misses out on. You can hear it in the atmospheric juxtaposition of her voice relative to the backing track, the lush suggestiveness of the backing track itself, and the intensely rhythmic style of Davis’ delivery. The IT Project manager in her everyday possesses none of the flat footed creativity we normally associate with first time recording artists or novices; instead, she comes fast out of her corner on “Middle Aged Woman Hip Hop Style” and wows listeners every bit as much with her energy as we hear from her humor.

The humor is constant, but never overstated. She comes at listeners from the first but her touch as both a writer and vocalist is never so weighty that the humor ends up failing the song early on. Like any great funny song that doesn’t rely on some level of obscenity or juvenile emotion, the humor in “Middle Aged Woman Hip Hop Style” lies in its details and Davis does an excellent job of orchestrating them in such a way they have a maximum effect. Her vocals are layered into the musical arrangement and sync up rather nicely with the percussive quality that gives the song its spine. The mechanics of this song’s construction are impeccable and Davis has put it together with some interesting flourishes along the way that keep it from ending up sounding like some cookie cutter, by the numbers track. “Middle Aged Woman Hip Hop Style” might be a track that was assembled in a studio or one piece at a time, however you might put it, but it comes off with immense naturalness.

The writing is pinpoint and never missteps. It’s clearly the focal point, along with her vocal, of the song, but the imagery and details are never so exaggerated that they make for any sort of jarring performance. “Middle Aged Woman Hip Hop Style” is pure satire and never risks any of the hamfisted efforts at being funny that might mar this song in lesser hands. She sounds like she’s been doing this a long time rather than coming off as some newcomer to the style and scene. It doesn’t sound like a ill fitting match and, instead, proves to be one of the more fun outings from anyone, any genre, in recent memory. Dawg Gone Davis is an impressive and surprising performer from the first and she’s sure to win over a large following from the sheer likability of this single. “Middle Aged Woman Hip Hop Style” is a good time from the outset.