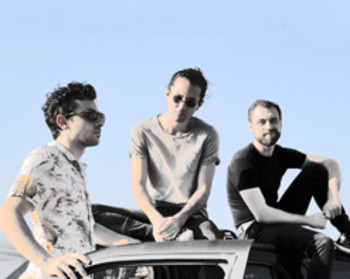 Calamity the Kid is a power trio hailing from Los Angeles, California. Their eclectic blend of 90’s garage rock and modern indie reaches an all-time pinnacle in their intoxicating new single, “American Muscle”. This 3-piece is fronted by Sam Doniger on vocals and guitar, Jack Gallagher on bass, and Ben Zelico on the kit. They say soulmates are ever-present; for these three, the Calamity began as children, whether they knew it or not. Jack was at Sam’s fifth birthday party and they didn’t even know each other yet. It would stay that way until they reached the age of 12 when they bonded over the great American pastime, baseball. Sam later played guitar in Ben’s old high school band, which oh-so-conveniently disbanded as soon as he joined. With all the personal comradery they were not even cognoscente of, the shoe absolutely fit for these three to officially join forces and showcase their collective might. The rest is Calamity the Kid history.

The band has set out to craft a sound that spins American music at the speed of the millennial mind. “American Muscle” crashes in with a thunderous booming kick drum, informing listeners, that one bar is their last chance to strap in before the inevitable lift off, because once this rocket launches, there is no turning back. The sugar-coated melody juxtaposed with the mud-dripping guitar tone inebriates listeners, leaving them collecting their jaws off the floor awaiting the next chorus. The verses are driven by a bass dowsed in fuzz to the point of being synth-like as it hovers over the pound of the drums. Ultimately it’s Doniger who takes the reigns with his youthful energy and witty lyricism, comparing the current state of the country with past generations and taking a look inside the mind of a modern 20-something year old.

The music video, shot, directed, and edited by Nathan Rocky, truly brings “American Muscle” to the next level and speaks directly to the current zeitgeist our country’s ensconced in. It opens up with Doniger in an American flag jacket and cowboy hat, lighting fireworks. Can it get any better? Vast images of the frontman standing on top of his car in the middle of the desert, walking through a bustling city, and action shots of a cross-country road trip prove that it can. Clips showcasing all different versions of “American Muscle” throughout the past century are sewn into the fabric of the video, creating a blanket explanation of the concept. In their own words, the band states, “The song is just a story about my friends. It’s about having that little bit of meaning you worked so hard to find taken away from you. The individual experience of growing up in America vs. the American we export.”