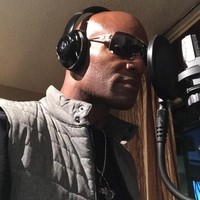 There’s no doubt that Saint Jaimz’s nearly two decades in the United States Army has influenced his development as both a songwriter and performer. The discipline necessary for building a strong career in the modern music world is in full evidence on his collection Life Songs and backed up by a passion and facility for the form that’s persuasive and natural/ It’s likewise apparent the Southern California based Jaimz has an unique skill for balancing a retro informed sound with a thoroughly modern presentation that never strikes a false note in his single “Absent Without Love”. As a sampler of the goods awaiting listeners on Life Songs, “Absent Without Love” promises a release full of fireworks and intelligent writing quite unlike what we’re used to from lesser practitioners of the style. Saint Jaimz is obviously geared for making an impact over the duration and singles like this, no matter how good, seem to only hint of what he will grow increasingly capable of.

The musical arrangement will exert every bit as much of a hold over you as Jaimz’s singing. The drums, bass, and keyboard contributions are handled with care, but it’s the guitar presence in the song that will stand out for discerning listeners, regardless of whether they are casual fans or not. There’s an unforced lyricism in the playing that makes this song a beautifully melodic gem without any other contributions, but the aforementioned presence of drums and keys brings extra drama and color, respectively, to the composition. The song has a number of restrained, carefully modulated peaks and valleys, in particular a notable chorus and bridge, and controlled instrumental breaks careful to not disturb the balance of the song. Everything is dovetailed and rounded off to serve each other with this performance of “Absent Without Love”.

The vocals, likewise, are carefully laid out to serve the cut rather than rake in praise for the singer alone. Jaimz has considered, evocative phrasing naturally coming out of him that some singers never quite manage in a decades long career and his instinct for coming down on phrases with just the right amount of drama makes it all the more appealing to hear. Like all great singers do, Jaimz brings listeners into the experience of this track and his voice gets under our skin with a minimal effort. He does elevate his game for the chorus and bridge, naturally, but even there the steady hand that’s defined the rest of his performance is in full effect. Saint Jaimz’s career in the United State Military likely gave no hint of what his music capabilities were, but we can no longer wonder. His collection Life Songs and single “Absent Without Love” are clearly from someone born to do this and the sound of him following his dreams is invigorating to hear and be a part of.