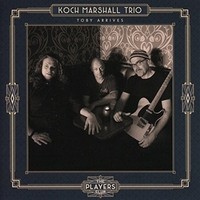 Greg Koch does the guitar work, Dylan Koch the drums, as they team up with keyboardist Toby Lee Marshall, on this B3 driven blues release. Considered one of the best blues guitarists out there, Greg makes it sound like he plays what he’s thinking at the time. The riffs that your mind is expecting to hear are replaced by a craftier version that fits.

Toby Arrives is a basic blues shuffle with some good guitar licks. Funk Meat is a slow bluesy offering. Heed The Boogaloo is faster paced, starting out with a Junior Walker feel and plenty of good guitar structure. Let’s Get Sinister is another shuffle with some quick fingered guitar work. Mysterioso is better described as a jazz tune. Enter The Rats is a stepped up boogie with lots of guitar and B3 runs. Boogie Yourself Drade conjures up some mind references to two of the best, the Reverend Billy G. and Gary Hoey. Sin Repent Repeat is a slower, quirky, offbeat blues/jazz thing.

A totally instrumental issue, the first few songs start off a bit slow, but then the talent kicks in. The three piece organ driven blues release lets you hear a lot of classic and untraditional riffs, both on the keys and guitar. Greg’s playing is a little jazzy, a little funky, and the riffs are untraditionally cool. Believe me, he doesn’t just play scale riffs. A lot of little nuances here with both the B3 and guitar. also, Dylan compliments the other two nicely. Guitar players and B3 fans will definitely like this one!