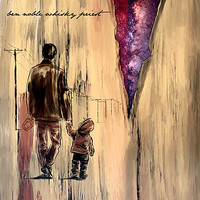 Ben Noble is a renowned singer and songwriter based in Minneapolis who has crafted many beautiful melodies with his immense knowledge and burning passion in music. Influenced by great artists like Sufjan Stevens, Bon Iver, Radiohead and Damien Rice, Ben has his work based on the engaging fusion of tunes played with the strings from his acoustic guitar. The new single ‘Cutting Teeth’ from the album Whiskey Priest is recently released which is already breaking all records and running coherently in the virtual world.

The single ‘Cutting Teeth’ starts over a slow phase with a single-stranded acoustic section played by him. Carefully crafted notes hold the ambiance of the track much before the song starts and words are actually sung in a slow rhythmic note. The prelude section gradually fades into a sweet and melodious journey of passion and perfection. Amalgamating the tunes of Indie and folk, this song takes a smooth ride from the slow gliding notes to the high upbeat section and again back to the smooth ride.

The whole song evokes a drama which pulls the listener closer towards it. This song surely showcases the brilliance of Ben and establishes him as one of the perfect music makers in this era. Being a skilled artist, Ben has taken every possible care to take the song over a high risen notch for its listeners.

‘You know the places I have been’, the words that glide from his mouth and lands on the charismatic shadow that eventually touches the listener deep inside the heart. The soft smooth rhythm of the song is enchanting and creates a beautiful aura of melodies that no one can hear just once.

Once the rhythm changes and picks up the pulsating drum section, Ben surprises the audience and further intensifies the track with a well-synchronized harmony. The lyrics have a gentle, delicate touch that gives a sense of contentment and compassion as the verses proceed one after the other.

The little pauses filled with soulful guitar section is another worth mentioning which illuminates the passion that Ben has crafted in such a brilliant and artistic way. If music can melt hearts, this song has the power and intensity to make a dead man breathe. With impressive background score, the song is a unique gem for the music industry.

This single ‘Cutting Teeth’ has an associated video which showcases a recording stage where the song is being sung with its variant musical arrangement. Ben sings in his unique impressive voice that can keep the audience engaged quite sometime even after the song has ended. The recording quality of the song is brilliant with high clarity and minimal digital effects imposed on the song.

Cutting Teeth is a song that will surely be remembered for a long time. Sitting alone in the darkness, this is the song that allures the heart to all its failed and unfailed attachments, vulnerability and passion. Ben’s magical voice and engaging musical score keep the song fulfilling and interesting and surely counts for many repeats.