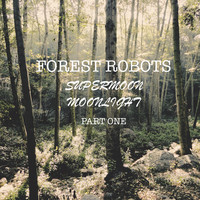 Forest Robots discovers a musical journey of nature with Supermoon Moonlight Part One. Listen and Enjoy!

Inspiration usually comes from the most unexpected places. But when it arrives, it brings a definite change in the world. Fran Dominguez is an innovative electronic artist and a nature lover who has dedicatedly worked all his life to spread the beauty of nature through his passionate music.

Forest Robots is a solo project by him which had initially started as a love letter to his daughter presenting her the mesmerizing beauty of nature and then turned into the beautiful journey of melody. The album Supermoon Moonlight Part One is a collection of ten songs that has its foundation enrooted into the beautiful meadows, valleys and oceans of the universe.

While crafting this beautiful letter he had tried hard to inspire his daughter to explore the gifts of nature instead of covering her days sitting inside the room and work towards preserving the natural charm of our earth. Dominguez is now able to spread his charm over a wide range of audience with this new album which contains his magical words in a section of ten intriguing rhythmic melodies.

The background music of the album is another unique feature that gives it a new creative edge and elegance. The musical association of synthesizers and orchestral instruments enhances the natural feel of the songs as they slip smoothly one after the other.

Though ten separate tracks, the songs can form an intense soulful journey of passion if they are played consecutively. ‘A Path Among the Woods,’ is the first song of the album that starts with a tuneful prelude and gradually progresses towards the main theme of the album. Just as Dominguez has always proclaimed, the songs are sung in the same intensified ambiance which provokes the audience to smell the charm of nature outside their house, mind, and soul. It speaks about the beauty that is independent and barren, yet that intoxicates much stronger than an addictive drug.

‘Times when I know you watch the sky’ and ‘Silhouettes follows the echoes’ are the songs which further establishes the path already set by the initial songs. With a catchy melodious chorus, the song has the power to pump blood into the deadest hearts.

The songs deepen the theme further and keep synchronizing the various tunes of the album into a strong intensified lyrical section. In an era when people are no longer attached to the natural aura of the environment, Dominguez has worked well to inspire the young hearts to feel and preserve the nature for their future generations.

The album is surely an inspiration that talks about the life that is outdoor, that has no restrictions, that needs care, something that is beautiful and lively. The musical variation, the upbeat sections and the soul-enriching content in the songs is sure to keep the audience interested and absorbed throughout the album. Prominently much importance is given to retain a high sound quality throughout the whole album. Being a visual engineer, he has worked well with the digital effects on the song, keeping it minimal yet appropriate.

The newly released album Supermoon Moonlight Part One is a unique journey of ten innovative melodies that have the capacity to inspire young hearts to travel outside the regular bondage of cemented walls and enjoy the mystic flavors of nature.