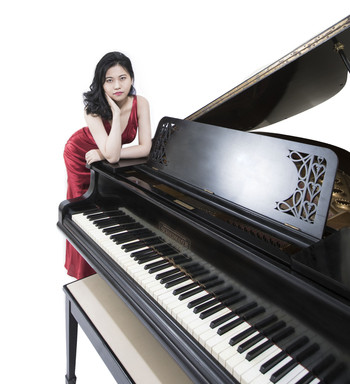 Artist Zhihua Hu has come a long way from her native China to the bright lights of New York. Her creativity was evident at a young age as she took to the piano seamlessly. When she turned 10 years old she was learning composition. It was clear that she was a natural when it came to music and she has capitalized on that gift. Ms. Hu ability to achieve high grades enabled her to continue studying at the Shanghai Conservatory of Music for her Masters in Music.

In a very short time she began making a statement with her diverse talent. In 2003 one of her pieces “The Fantasy Of West Lake” was selected to be a part of the “Young Composers, New Compositions Concert” at the Shanghai Spring International Music Festival. This was only the tip of the iceberg of what she would do with her music. In the same year her piano compositions, “Soul of Great Wall” and “Exploration”, each won the San Carlo Excellent Piano Works Entry Award. Another notable award came during the 5th New Music Week in Shanghai in 2012 where her chamber orchestra work, “Mind Moves with Consciousness” won Excellent Sight-Reading Composition Award.

Fast forward a few years when she was accepted into the Manhattan School of Music in 2015. Here she would pursue a Masters in Music Degree in Composition and was taught by Professor Reiko Füting and pianist Kayoung. One of her biggest honors was being able to perform on Capitol Hill in Washington D.C.

“That was quite exciting for me! I was very honored to be invited to compose the theme song “Asia-Pacific Eagle” for the 2016 Asia-Pacific Lunar New Year Concert. “Asia-Pacific Eagle” is a very catchy song with inspirational lyrics and memorable melodies. I’m very pleased that I was chosen to be one of the artists helping to advance musical communication between the Chinese and American cultures.”

Ms. Hu’s talents were also recognized in Europe where she was invited to perform first in Italy at the “Cortona Sessions for New Music” and “International Music Festival of Adriatic” and then in France at the “Zodiac Music Academy & Festival”. Back in New York she began to plant her own flags taking the stage at one elite venue after another. In 2017 one of her compositions “The Epitome of Musée du Louvre” was performed by the Manhattan School of Music Symphony Orchestra. That same year she earned her Master Degree from the Manhattan School of Music. It became an eventful year for her as she was soon invited by the Asian Cultural Symphony Orchestra of USA to perform with famous singer Zun Huo, Shanghainese singer Bao Lin, Suona master Yazhi Guo and famous conductor Fei Fang at the Alice Tully Hall, Lincoln Center.

Ms. Hu has accomplished much in a short time and is always looking to explore new avenues in music. She soon founded her own concert series “THROUGH THE NOISE”. This concert series was first debuted last year at the Chris Chapel Hall, Riverside Church which was an evening of new solo and chamber works with famous German composer Reiko Füting. She is looking to follow up this performance with a second installment with Chinese and Western Musicians in OPERA America. She will be introducing her new ensemble composition “Nacht”. On the heels of this grand show she is due to showcase her personal composition and piano concert in Carnegie Hall in July of this year. For her show in March she has gathered such composers / musicians like Reiko Füting (Germany), Pranav Datla (America), James Diaz (Colombia), Longfei Li (China), Paolo Marchettini (Italy), and Alexander Held (Germany). In addition, we will include Special Guest Performers. They are Vocalists, Erhu and Banhu, performer Feifei Yang (China), Guitarist Danniel Lippel (America), Pianist Yegor Shavtsov (Ukraine) and Violinist Jaram Kim (Korea).

“I’m quite excited about it and I am really looking forward to it! This concert will be my first Personal Compositions and Piano Performance Concert. Several of my piano and ensemble compositions will be performed in Carnegie Hall, and I’m looking forward to collaborating with musicians from all over the world. For me, this concert will definitely be a great opportunity to show my music to the New York audience and musically communicate with them! I hope more and more people will get to know my music.”

Ms. Hu is not only a musician / composer but a teacher. She allocates her time to teach at the Tian Song Musical Arts and Musipire Professional Music Education. At the school she teaches piano performance, music theory and aural skill. She has been a part of the faculty at Tian Song Musical Arts since 2016 and looks to broaden her dedication there. Ms. Hu is also looking to one day record her music to be placed on a CD. She admits there so many compositions that it would take several CD’s to fit all her music. Ms. Hu is an amazing talent who is still growing here in the America but hopes to entertain the masses one show at a time. Catch her upcoming performance at The National Opera Center / OPERA America on March 5th and Carnegie Hall on July 9th.