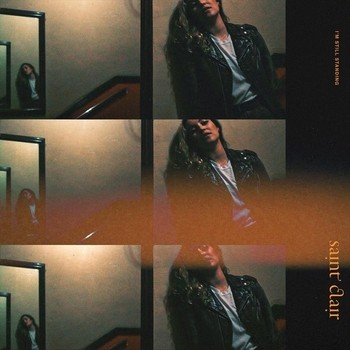 Self-producing and arranging for the very first time, Saint Clair takes Elton John’s fist-pumping, 80s smash and deftly spools it out into 4 minutes of quietly defiant, perfectly observed electronic soul. Speaking about her reimagining of the track, which pushes sparse guitar bursts and her resonant vocals to the fore, Saint Clair says; “I was touring in Australia last summer, and after exhausting almost every film on the long-haul flight home, stumbled across the Disney film ’Sing’. The gorilla performs a rip-roaring version of ‘I’m Still Standing’ which reminded me how much of a banger it was. So I got my laptop out and started playing around with how to approach it differently and ended up making it into a proper cover.”

Saint Clair – named after her mother’s Scottish ancestry – is the recording alias of French-speaking North Londoner, Emma Topolski. Having grown up surrounded by painters, actors, and journalists, Saint Clair became the first in her family to turn to music, pursuing a career trajectory that’s so far taken her on the road as a backing vocalist for long-time friend Laura Marling (in whose Reversal Of The Muse project she also participated, alongside HAIM, Dolly Parton and Marika Hackman), and seen her play keyboards and sing BVs for Ghostpoet. She has also supported Bastille on their most recent arena tour, as singer and bassist in emerging, Radio 1-supported rockers Childcare (recently appearing live in session for Huw Stephens).