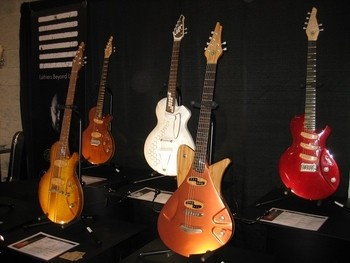 PRS – PRS is introducing six versions of the SE acoustic guitar line in addition to the Mark Tremonti MT15 two channel amp powered by 6L6 tubes, with five gain stages before the Master for full, lush distortion, a gain channel, and clean channel with push/pull boost control that adds a little overdrive for old school crunch.  Additional features include an effects loop and bias adjusters that are accessible from the back panel for ease of servicing.

Zematis – In addition to the custom metal topped pieces, they have a new line of solid body LP style guitars available in numerous colors.

Ibanez – They’re commemorating their 40 year association with Paul Stanley with the Paul Stanley “Diamond” 40th Anniversary PS1DM, with more than 1,400 rhinestone pieces, and 30-years with Joe Satriani with the new JS1CR30, a badass ‘Chrome Boy’ with a SUSTAINIAC® Driver, DiMarzio® Satchur8™ pickup and an Edge Trem.  Also, the new AZ series features a nitrogen heated neck.

Yamaha – The FG Transacoustic Series guitars are designed to further amplify tone without using an amp.

Peavy – The have the purpose built for slide playing, Powerslide Guitar series, including the Robert Randolph signature model.  Another new series is the Composer Acoustic Series with an offset sound hole for improved volume and bass response.

McPherson – A series of carbon fiber guitars with a no-touch neck design and precise intonation system.

Minarik – They continue with a gorgeous line of custom made guitars and basses including left-handed versions. The Studio X-treme offers six unique models, and the Super Custom Series offers 22 models, including acoustics.

Trinalog – Trinalog Effects Station is an App-Controlled, Cartridge Based Analog Effects Platform for guitar players that dramatically reduces the weight, and complexity of using traditional pedals without digitalizing the sound. Apply presets and cloud storage, making tone settings sharable and easy to learn.

Logjam – A line of various versions of foot-tapping percussion sounds for instrument accompaniment.

Sonic Farm – Offers a bunch of versions of preamps, direct boxes for instruments and vocals.

Seymour Duncan – The PowerStage comes as a 700W rack unit, and a 170W version that fits on a pedal board.

IK Multimedia – The iRig Series has a USB pedalboard controller with audio interface, keyboard controllers, a series of various interfaces for phones and laptop/pads, software and apps.

Rock N Rolla – A really cool line of retro portable record players that can interface with virtually every kind of device.

TV Jones – Well known for their Gretsch replacement pickups, they have the new Starwood Series as well as the Brian Setzer Signature Series.  In addition they offer a line of bass pickups.

Tonik Sound – PULSE attaches to an acoustic guitar and modifies the vibrations within the body of the instrument. Delay, distortion and reverb come straight from the guitar with no pedals, wires or amps.

Singular Sound – The BEATBUDDY is a unique stomp box unit that allows you to program, play/change drum tracks.

Slaperoo – The Slapstick is a hand held broom-handle gadget that can be played like a bass guitar by slapping.  Very interesting, and sounds great.