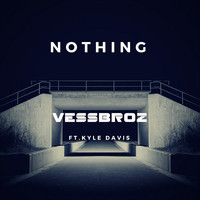 The first single from Vessbroz’s impending full length album Lost, “Nothing”, features the singular vocal and lyrical talents of Massachusetts bred Kyle Davis. Davis has aspired to be a singer and songwriter since his fifth birthday and the long years he’s put in service to perfecting his craft leave him at an astonishing stage of development for someone so young. There’s literally nowhere that Kyle Davis can’t go and the astonishing artistry and subtlety informing his presentation is deeply satisfying to hear. His contributions to the album are immense and, if we’re to take this first single as representative of Lost’s overall quality, we can expect his pairing with Vessbroz to have produced a modern EDM influenced classic. “Nothing” will challenge your preconceived notions about what pop and EDM music can accomplish and proves to be both a rewarding and substantive listen.

He brings the complete package to bear for listeners. Kyle Davis’ singing, approach to tackling a lyric, and words themselves will convince any non-believers that you can do great things with even the most seemingly disposable of musical styles if you are so inclined. Davis, working with Vessbroz’s Pour brothers, has found two musicians with every bit as much personal style as he exhibits, but they can offer musical and compositional chops to back it up. He grabs your attention from the moment he enters the track and his voice style is a marvelous mix of just the right amount of rough hewn gravitas working alongside palpable youthful energy. His astonishingly fleet footed phrasing expertly navigates through a winding, frequently fast paced, vocal melody and he doesn’t betray a single misstep along the way. Naturally, the studio is a far more forgiving environment than live performance, but there’s not a scintilla of evidence that he couldn’t pull it off at a moment’s notice if he had to.

His writing is the final ingredient and every bit as passionate as his vocal or the musical arrangement provided by Vessbroz. He chooses all the right words to depict the song’s subject as succinctly as possible and it makes for an even more impactful listening experience. The beauty of this performance lies, primarily, in how it all comes together with such pinpoint precision, but never sounds forced. The immense naturalness propelling the song forward is one of its chief strengths and it sounds like a nearly spontaneous and definitely inspired piece of musical art. There are improbable touches that set it further apart – the often crystalline acoustic guitar, the almost discreet use of synthesizer driven flourishes, the twists Davis takes with his vocal melody – and it helps make “Nothing” one of the best first singles in recent memory. Vessbroz and Kyle Davis’ pairing on the album Lost is set to have a mighty and positive effect on the career trajectories of these important young artists.