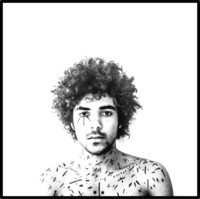 From its title to its final hollow tunes, Black Water is a track that haunts and seduces listeners into relating to its singer. The first track in Thomas Abban’s album A Sheik’s Legacy, Black Water has a legacy of its own.

The first word that comes to mind with the opening notes from Black Water is ‘discordant’. It is almost as if the guitar instrumentation does not gel at the beginning of the song. However, as the song progresses and Abban lends his desolate vocals to it, listeners realize that the seemingly out-of-tune guitar chords are actually a stage for the soulful mood that Abban portrays through the whole song. Each string that seemingly falls into place and welcomes the drums that come up a minute into the track is a testament Abban’s musical ingenuity in Black Water.

Alternate rock on its own is a striking genre, but Abban takes Black Water to a whole other level. Making use of his hauntingly pure voice and unpredictable crescendos, he forges a bond with the listener, making his audience empathize with him. The highs and lows of his vocals, the rise and fall of the tunes created by the instrumentation, all bring the listener into the moment. They make him nod his head, stamp his foot, pull on imaginary guitar strings.

Each passionate and desolate word that Abban utters blends in with the mood already set by the singer’s voice and the background tune. Even the hair-raising high notes of Abban’s voice and his chillingly despairing laughter as he sings “I’ve been down” contribute to the sensory roller-coaster that is Black Water. It is only when the last notes begin to play and listeners hear the words of the first verse again “I live by a sugar mill” that they realize they cannot remember any other line in the song – just the beat and the emotion behind it. That is when they realize that Black Water is in one word, haunting. Distinctively haunting.