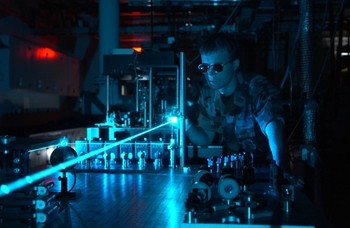 Technology has advanced over the years so far that we now have drones turning into potential vehicles, while we’re also developing AI to the point where the first robot was given a citizenship of a certain country. It’s the same for lasers, which are quickly moving from something that we watched in SF movies to real life. Lasers are devices that emit and focus light through a process of optical amplification, stimulated by electromagnetic radiation. They can spend tons of energy and focus it on a single point, thus burning through the surface. Not only can lasers be potentially used in warfare, but they are also used in surgery, or for cutting metals. However, in this guide, we’ll take a look at the future of lasers, the most powerful lasers that were developed by scientists in recent years.

Lawrence Livermore National Laboratory in California houses the most powerful laser in the world. NIF (National Ignition Facility) is the size of a football stadium and combines the power of 192 lasers and focuses them on a single point. This produces the energy that’s almost 60 times more than any laser before NIF and can reach the temperature of about 100.000 million degrees Celsius on a surface. Sun, at its center, has the temperature of 15.000.000 Celsius, so you can imagine just how powerful NIF is. When on its peak, NIF can produce up to 500 trillion watts of power – a thousand times more than the whole US uses at any point in time.

You might be wondering what it’s for? Well, the goal of this laser is to focus all this energy from 192 laser beams on a small target that’s filled with hydrogen fuel. This would fuse the hydrogen atoms and release more energy than what the lasers spent. So basically, NIF’s goal is creating clean energy.

University of Nebraska scientists has built the DIOCLES laser to study the interactions of light with matter at their peak levels. It’s named after a Greek mathematician from 240 BC, Diocles, who first figured out that mirrors can be used to increase the intensity of light.

While this laser can’t compare to NIF in sheer power, it does have the highest combination of max power and repetition rate of any other laser in the US. This means that it can reach its peak repeatedly, faster than NIF or other lasers that need time to reach the peak again. When focused on an electron it can increase its mass by up to 20 times! The great thing about Diocles is that it actually creates light. Not just any light, though, as Diocles can create light that’s almost a billion times brighter than the light at the surface of the Sun. If we ever need an artificial sun, this laser’s going to give it to us.

Wicked Lasers have designed this one to look like a lightsaber. This is the strongest portable laser in the world, which means you can carry it around with you and actually use it. It’s built with the blue-laser diode from a Cassio projector and only costs about $200. It’s powerful enough to inflict burns on human’s skin, or permanently blind a person, which goes to say that this really isn’t a toy. That’s also why you’ll get a pair of safety glasses with it, just in case you stay safe while using it. Imagine if you’d be able to use LED Lighting and turn it into a laser. That’s pretty much what guys from Wicked Lasers are doing, as their other laser system Sonar uses blue-ray diodes!

Often called the most intense laser in the world, the Hercules laser’s power is at about 300 terawatts, but expected to increase to a potential 1000 terawatts after it received funding from a National Science Foundation. University of Michigan scientists believes that this technology could lead to the shrinkage of particle accelerators, which would completely eliminate the need for huge research facilities like CERN. Basically, this would mean that scientists around the world would be in a position to research the possibilities of particle technology from their home labs, which would hopefully lead to many more discoveries. Hercules laser can be focused on a tiny spot, the 100 times smaller than that of a human hair, which is why its intensity is so high.

This laser is one of the examples as to how lasers can be put to use in the future. It’s a fully functional weapon system that can be installed on a vehicle and used to shoot down drones, or even airplanes. Not only is firing Athena much cheaper than traditional missiles, but it’s also completely silent and INVISIBLE! That’s right, they literally won’t even know what hit ’em! The potential of this laser in future warfare is limitless, especially once it gets more powerful. It’s actually likely to become even more reliable than current weapons, due to the speed of laser beams. No one wants to see the future of war in action, but if it comes to it, a guaranteed hit is the best hit. Lockheed Martin, developers behind Athena, expect their lasers to be able to deal with larger threats and cover larger distances (currently, its range is about one mile).

There’s no denying we’re going to be seeing lasers in practical use in the future. Technology, as it is today, is advancing rapidly and getting more sophisticated, so while AI is predicted to be the future of warfare, so are lasers expected to become something else entirely. We are just getting a glimpse of what’s to come, as we haven’t even scratched the surface of the real potential lasers can reach. There are many more powerful lasers out there in the world, all made with a particular purpose in mind. The ones we’ve listed here are known as the most powerful right now, but who knows what the future holds? Star Trek did get a lot of things right, in the end.