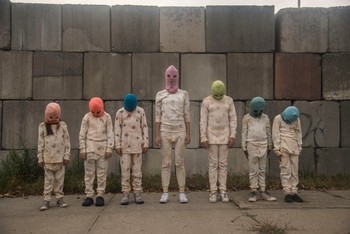 Today, for the anniversary of The Russian Revolution, the Russian feminist art collective Pussy Riot releases a new song “Police State”, which in usual fashion is accompanied by a music video HERE. The moving picture sums up the current state of affairs of authoritarian leaders like Russia Putin and America’s Trump: Actress Chloe Sevigny, who plays a law-enforcement officer in the video, is carrying a baton for riot control. Today’s youth is strapped stuck to watch political leaders run and ruin the world. The ballet dancer’s grace is juxtaposed by police being fun-stoppers.

Pussy Riot’s Nadya Tolokonnikova worked with GRAMMY nominee Ricky Reed on the song and the video was directed by Matt Creed and the director of photography is Sean Williams.