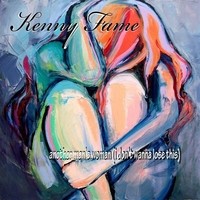 A native of Harlem, New York, Kenny Fame is an international award-winning singer, poet, and songwriter, who have risen to fame with his fervent contributions in alternative R&B music. A new single EP, ‘Another Man’s Woman (I Don’t Wanna Lose This)’, is released this year, in which Kenny has proficiently established his competence and adaptability in other music genres also.

‘Another Man’s Woman (I Don’t Wanna Lose This)’ displays the amusing fusion of Kenny’s exclusive style and uniqueness. He has shown true talent and versatility while he blended R&B music with the musical styles of Country blues genre. The song nourishes his poetic nature and effectively brings out the gentle humanitarian side of him. Kenny’s distinctive voice adds another feather to this amazing creation.

The song begins in a controlled acoustic guitar arrangement which tunes aptly with Kenny’s sharp baritone as he mouths the words with extreme confidence. The initial flow of the song is deliberately kept slow to match his unique style of singing. But as the song takes pace gradually, the listener gets hooked to its appealing musical charm.

The lyrics are intense and strongly based on human relations, mutual trust, and betrayals. Kenny has artistically penned the verses in a way so that a listener can personally relate to the distinct theme of the song he has curved so brilliantly.

The lines just before the chorus, ‘I know there is someone else and I know you gonna break my heart,’ intensifies the atmosphere prominently and pricks at the bleeding hearts which might have experienced betrayal or fears the pain of losing their special someone. It is difficult to say if Kenny had written this song from his own life experience or through the mere imagination of the situations, but the emotions the song travels are irresistibly genuine and relatable.

The song describes the insight of a human heart that fears pain and hides its weakness behind a feeble facade of strength. The impressive lyrics give an extremely realistic touch to the song and by the time the song ends, an acute heaviness consumes the atmosphere.

‘At your other man’s choosing, I am the one you are just losing,’ another brilliant instance from the chorus which plays through a catchy melody and simple words but invincibly provokes the broken hearts with defeated stories of lost love and painful loneliness. He has prominently kept the background score rhythmic yet subtle here to emphasize deeper into the meaningful verses.

The chorus forms the brightest star in this otherwise intense harmonic journey. The emotional conflict of holding onto someone, who has once been the reason to breathe and is now known to have already lost to someone else, is elegantly portrayed in this particular part of the song. Kenny’s undying exceptional confidence further keeps this burning flame alive as he sings and repeats the chorus in his alluring and compassionate voice.

Produced by Jack Mullin and co-produced by Kenny Fame, ‘Another Man’s Woman (I Don’t Wanna Lose This) is definitely one of those exceptional gems by Kenny which would inevitably engage its listener into an emotional tale of love and despair.