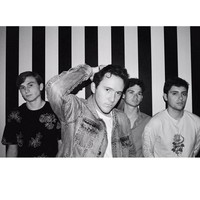 Indie rock group Strange Theories from Louisiana takes their influences from such acts as Kings Of Leon, The 1975, Arctic Monkeys, and classic rock in general, covering said genre from time to time. During their time though, this summer for instance, they would take the time to write and record for an all new track titled “Wiped Out”. That has an accompanying video to follow suit with it of course.

The video and song both released this past summer go hand in hand with one another, as each one plays off the other, as it is the same thing. Sort of, minus the video portion that showcases the band performing outdoors and indoors, the video going back and forth detailing various incidents going on. There is even a moment’s notice of where the video briefly turns into a lyrical video, the band mates wording the lyrics, as the lyrics are shown. Other offering’s from the video showcase each of the band members sitting or standing in front of a screen, as this background of spirals, circles, and what not go off behind them as they look up, down, and straight into the camera lens. Whilst other areas of the video shows a couple fighting, possibly breaking up in the long run, as they just were just pretending to be friends or not pretending it’s a little fuzzy in that area. But in short, the video details this couple throughout its song as them again pretending or not pretending to be friends. In the end having them not be friends or breaking up altogether. It’s really hard to pin point where it all comes together really. That is how the video plays itself out though.

As far as the song itself goes, it is hype worthy, very upbeat, really pulling the song along, as it plays on. The song really picking up on the influential aspect that Strange Theories look upon when creating music, such as this song. For instance the vocals bring to mind the act The 1975, while the music portions bring forth more of a Kings Of Leon meets Arctic Monkeys feel. It is very upbeat as said, but more outgoing, really standing out, that you can find yourself humming to the song itself, if not singing right along to the lyrics and song in general.

That is the vibe that this band and this song as well as video do. They push out this hyping essence of flare, that keeps the music in check, really staying in tune with everything going on. The band being goofy yet serious at times, in the video, but in the song it is more fun and highly entertaining too. Like how a song would be when played live, you get that highly fun yet addicting feel of entertainment, that never wants to end. How that works, is how this band works, they keep the feeling alive, not letting their music bring them down, but keep them up with hopes and high praise of what they can do.

“Wiped Out”, is a video with a song attached to it, that just make things work out so well for Strange Theories, that without this new material off their hands, these guys probably would have not made it to this point in their careers as musicians. This track is what made it last for them, it is that entertaining.