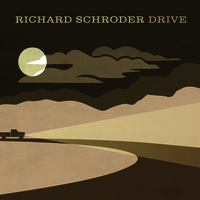 Country singer and songwriter, Richard Schroder, is out with his latest album, Drive. A meticulously crafted set of songs that have quintessential country elements with Schroder’s own unique spin on them. Schroder put his heart and soul (not to mention countless hours) into Drive, and it shows. He is especially known for working and reworking and reworking again – a perfectionist who is dedicated to only providing his very best for the music he loves.

Schroder’s voice is built for country music. While that is the type of thing that can lead me to stray from the genre, what with so many similar voices, you can’t deny his talent. His vocals are clear and they have the twang you expect to hear. He recruited the very best musicians to accompany him on this journey, including Duke Levine (guitar), Jamie Edwards (keyboard), Annie Hoffman (bass), and Steve Chaggaris (drums). They bring the tracks to life and give Drive the power to bring you back to a simpler time in your life through the nostalgia it induces.

Schroder’s greater accomplishment, however, lies in the lyrics in each track. Shroder takes his job seriously, and has gone to many songwriters in Nashville, Tennesee for their advice and expertise in order to write the very best songs for Drive. That’s a level of dedication I respect and admire deeply. He doesn’t do this in vain, either- he is a great songwriter that creates effective and catchy lyrics that stick with you and are easy to remember (and sing along with). His songs take you exactly where he wants you to be, even if your own experiences don’t match. It’s okay, he’s got enough to spare.

My favorite track is “Right In The Middle” which has a fun melody that had me swaying along. A couple of listens later and I was singing with Schroder, as well. The lyrics are a bit bittersweet at first- it’s about not being sure where you stand with someone you may or may not have feelings for, and vice versa. Things look up, however, and they realize what they’re feeling, and you can guess where it goes from there. Schroder is a master of writing simple but effective lyrics that get the point across without being inaccessible.

“One And The Same” was very confusing at first- the first few seconds of the song sound like I was transported to the 80’s before his signature sound came back into play. I loved it. It’s the only song that really does sound like he merges genres (outside of rockish guitar playing throughout the album, which is a regular thing in most modern country music). It’s an interesting mix of sounds, which works well with the lyrics. It’s about the similarities between him and some other person, mentioned in cute and fascinating ways. Be sure to pay attention to this one!

While I am not the biggest country music fan, I will say that Richard Schroder knocked this one out of the park with Drive. It is a solid album through and through that hits on everything I believe he was trying to accomplish. I’d suggest it to anyone who wants to hear some good music, especially if they have an appreciation for the genre. I look forward to seeing what Schroder puts out in the future.