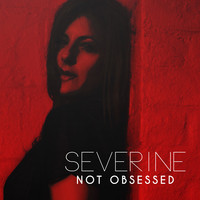 This young singer/songwriter, Severine, is of French extraction, born in the United States, and later raised in her ancestral homeland. Her musical education began early with a love for Louis Armstrong and Nina Simone, those influences firing her passion for music to life, but she later chose another course in the name of practicality and used a business degree to pursue a corporate career for a time. The call of a musician’s life continued to haunt her and she decided to forgo her conventional career to pursue the passion that had guided her heart all of her life. Despite the title of her new single “Not Obsessed”, Severine definitely approaches her material like someone obsessed – the sonic elements are all in place for this atmospheric track to get over in a big way with her target audience and the globetrotting she’s done as a young lady gives the performance a slightly cosmopolitan air it might otherwise lack.

The track begins with a brief passage of deliberate, yet dramatic, piano before segueing into a dreamlike groove with steady percussion molding everything into a definite shape. The transitions in the song are every bit as patiently developed as the song itself is – Severine seems to be following the song’s emotional truth and everything emerges in a coherent, beautiful way. There’s an orchestrated quality about the performance, but it’s never so pronounced that it leaves the track bloodless or inert. Passion comes through during every second of this performance and Severine’s voice, surging with feeling, commands it from the center of the mix. She exhibits the sort of sixth sense we typically hear from singers plying their trade for a decade or more – she knows exactly what passages to emphasizes, when to pull back and show subtlety, all while still enveloping the lyrical content with often moving emotive gifts.

The lyrical content is well written, never pseudo poetic, and makes for a good fit with the musical arrangement. The same aesthetic powers both areas of the song – an insistence on avoiding any self indulgence, never using any extra musical notes or added lyrics, and an obvious attentiveness to ensuring that both the arrangement and lyrics complement one another in the best possible way. The song, fortunately, minds its running time as well – Severine wisely doesn’t over extend herself or the track’s central musical ideas and, while it is restless and never content for staying too long in one place, it never feels like the listener is being asked to handle more than they can bear. Thanks to the contributions from her collaborators, Severine comes across as a supremely confident and sure-handed musical artist with “Not Obsessed” and the intelligence powering her songwriting exhibits the sort of qualities you can build a long lasting career from. If it’s any indication of the quality of her forthcoming EP release, she’s going to make a big impact for years to come.