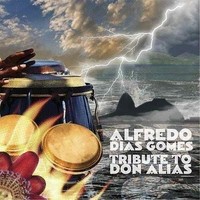 This is pure enjoyment for the sake of it, and even if you don’t like tribute albums, that takes nothing away from such a great homage. It’s jazz in the first place, so you also have-to appreciate the work of drummer Don Alias to know what you are hearing. Then it is worth every second of your time, and you see that it’s not copycat cover affair at all. And the modern flavor of Gomes makes it all-the more interesting. While he sticks to the basic traditional arrangement he also puts his own signature on it. This isn’t a case of dominating any of it, just a case of making sure to be himself about it. Congas and hand drums are what “Charles” Don Alias was all about, as far back as the Bitches Brew album when Miles Davis needed to fill percussion parts that Lenny White and Jack DeJohnette weren’t able-to play the marching band-inspired rhythm he needed for the album. Anyone who’s a fan of that album should know this and a little about where Don Alias came and went in his career after that. He got around to everyone from Herbie Hancock to Weather Report, Pat Metheny and Nina Simone. He is paid respect to on this album with the utmost care, resulting in one of the finest tributes on record I recall hearing.

Most of these tracks are of the variety in which I have already heard, so it is imperative as to how they compare in my opinion. The music is played fantastically and you can’t turn it off, so I can report that it’s just as good to be introduced to some fine work this way, as it is to hear the original works as you already know it, only played by someone else. This CD can serve as either way to get into it all. “Georgia O (ft. Widor Santiago)” played as if I’d heard it a hundred times and I was not familiar with this song. The same goes for “Sweetie-Pie” with its snappy fills, stopping on a dime at every turn before rolling back into action.

This album is simply awesome in every way, and “Creepin’“ by Stevie Wonder is one of the most hypnotic pieces of them all. This is so exquisite it’s probably the highlight of the disc. But there’s really no downs, it’s all ups on this precision recording with excellent production. You can remark all you want about making a tribute album after so many originals, but it depends on how it’s done. ‘Uncle Jemima” once again shoes even more percussion chops to let you know he’s up to every note of the work of Don Alias to pull it off. And he takes it out on the last song with “Solo” a Dedication. And a killer one it is.