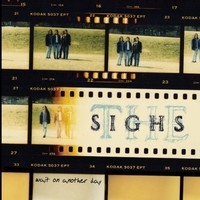 Massachusetts-bred band The Sighs compose in an eclectic style borrowing from Power Pop music, combined with an Alt-Rock aesthetic. They write of the mundane and the complex things on life and relationships, and probably doesn’t understand everything but in some way question what they already know. On this his latest entitled “Wait Another Day” it seems to captures the spirit of Nirvana and The Beach Boys at their most GrungiBeachBoyingest. The album brings back some of the angstyness and catchy Poppy melodies of the 90s’ grunge and Brit Pop scene making it a great album for fans of the decade that have been left with a whole in their hearts. This is undoubtedly The Sighs’ best effort so far. Their album “Different” was strong and so it’s pleasing to say that this album surprising surpasses expectations. It clearly puts The Sighs in an elite league of genuine bands and it is a must listen. Influences by The Beach Boys, Foo Fighters, Default, 10 Years and many more acts.

Track 1, ‘It’s Real” sets the stage well for a consistent and uplifting musical journey. With this CD, expect soul-stirring harmonies and at times hypnotic Beatles/Beach Boys poppy rock style instrumentation. Straight away it’s clear to me that these 11 tracks are an imaginative return to meaningful song writing fused with the better musical touches of today’s Pop and Alternative Rock, all with the charisma and talent of a Singer/Songwriter. The Sighs at times reminds me of The Dandy Warhol’s, Tom Waits. I must admit today’s music has many people feeling of bit of soullessness – how appropriate that I get a CD by an artist like The Sighs that was a real shock to the system – in a good way. The album continues in hooky fashion with the magnificent “Words of Love” and “Wait On Another Day” two brilliant exercises in self reflection laden with hooky vibes and an impressive vocal delivery from LaRoche. The only surprise is that these 2 pieces might sound ‘radio outdated’ of the highest order. ‘Thoughts On Another” follows and is a pleasant journey through a Country-ish passion play of their psyche. The harmonies beautify what could have been a nice, prom or farm bar dance number. ‘Half A World Away” could be featured on TV or Film, especially one taking place sometime in the 90s, showcasing The Sighs as a moving and grooving unit, with its amazing chorus.

In the end The Sighs are a real breath of fresh air compared to what’s out there right now. As I mentioned earlier, ‘Wait On Another Day” is a real shock to the everyday musical system presently in place. Of the whole album, 4 songs are in the category of brilliant, 4 are good, and 2 skipped through in rotation. I wouldn’t be surprised to see the band’s popularity continue to grow as it did in my own household during the week.