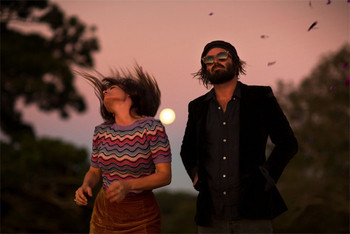 Aussie sibling duo Angus & Julia Stone have unveiled a new song and beautiful new video to accompany it. “Chateau” is the second single from the pair’s upcoming album Snow, out September 15. The video premiered yesterday via Billboard.

Directed by Jessie Hill and set in the magical surrounds of Mexico City, the video for “Chateau” follows two young rebels (Australian actors Courtney Eaton of Mad Max Fury Road and Dacre Montgomery, the new lead in the upcoming season of Stranger Things) on a surreal and colorful adventure, stealing Angus and Julia’s car, crashing a decadent wedding gathering and leading guests to an underground disco. The couple falls madly in love in the process, against the stunning backdrop and hypnotic vibes of “Chateau.”

“It was quite magical because Angus and I have never spent that much time together, just the two of us,” says Julia. “There’s always at least an engineer or tour manager but the last phase of writing and recording was just eight weeks of him and me and the quiet of the land. It was a beautiful time.”