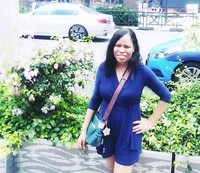 A Registered nurse, passionate poetic and lyric writer. Writes to give voice to those impacted by social issues. A parent of both chosen and birth children, Ruth Garnes is an advocate of children affected by abandonment and abuse. Born in Belize, she migrated to New York at age eighteen. After studying nursing, worked as an emergency room nurse initially with the disfranchised and homeless population of New York. Later worked in the Houston Texas area. Has volunteered with both the United Way and Benevolent Missions International. It was the challenges and emotional struggles of her chosen children that gave birth to some of her poems.

This is a poetic author of two collections of poems and lyrics, “Fantasy Or My Reality” and “The Cry Of Our Children.” But if Ruth Garnes is even on the songs, I have no way of knowing. So, the songs are all I can talk about. This is a different way to go with music indeed, because it leaves not a whole lot to describe about the music or the artist unless you follow her books, of which I do not. But they play like various favorite songs of hers, rather than by her. This just goes to show how much there is to be known about Ruth Garnes coming from music lovers. It’s just not the average approach of reviewers to not know these things. “A Place Of Love” is credited as a Song By Ruth but you’d never know by listening to it. This sounds like it’s done by a full band, right out of 1960 or something. It comes with a message but all these songs do. The reggae roots are evident but that’s all I can say about it. The track also has an audience tracking but I don’t think it’s recorded live. This isn’t the greatest piece of music but it does deliver that message loud and clear. But if you rate this based on the track, not knowing at all where it is coming from, it stands on its own two feet with no issues. It’s just not what I expected to hear, nor do any of these tracks seem to feature Ruth on vocals. “Red, White and Blue” features a piano and is pretty much a song of freedom which is easy to detect by the title alone, but it carries on about the American flag. It’s one of the better tracks because it has a chance to breathe some life into the ears by being easy to follow. I’m not everyone so I can only speak for what I hear, but this is a decent tune with solid advice in the lyrics. It’s just hard to be very descriptive of an artist who doesn’t even appear to be on the songs. It sounds more like she had someone record them. But I could be wrong about that, it’s just that it is all there is to go by.

“September” is a track full of fun, but once again hard to get a read on to describe the content. You will be tapping your toe but you won’t be sure as to why, other than the song being enjoyable enough to get that much out of it. “September Instrumental” speaks for itself with the vocals stripped out of it. They’re equally enjoyable because the chorus is still left in to remind of the vocal version. “Xoxo Heart Emoji” is the most modern track to be found, and it sounds a cut above the others in every way, but it doesn’t render them any less worthy of inclusion. It just contains the most universal subject matter, even if it is about using internet symbols to communicate.