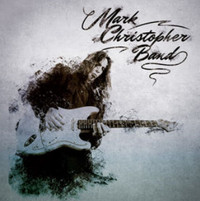 Mark Christopher was born with music in his blood. Influenced by his jazz pianist father, he picked up the guitar at 15-years-old and has yet to put it down. Playing throughout LA he met up with Steve Roybal. A true musician, Steve is a former member of the Los Angeles Jr. Philharmonic, and has performed with The Midnighters, The Coasters, The Drifters, Don Sugarcane Harris, Ike Cole and Redbone and many others. Rounding out the band is Phillip Friedland who made a name for himself playing in the local LA club scene for years. Imagine is the EP with five burning tracks, and they’re all to notch.

“Bull Frog Boogie” kicks off with some live audience atmosphere before the track starts. There’s a good rhythm keyboard to start things rolling, and then the guitar of Mark Christopher takes over and the rest is history. This is a red hot classic blues rock number that competes with anyone this side of SRV and Joe Bonamassa, with even more greats to compare to but you get the picture. They’ve all done this and it’s kept up with very well in every department, with pick slides and everything. Blues-rock and R&B collide with grace and perfection on this. You can’t open things any better.

And it doesn’t slow down, as “Cat Fight” gets underway as if a real late- night cat brawl on the block. It’s the keyboards and drums that meet evenly with the guitar on this, plus a mean harp that won’t quit, which makes this a top shelf piece. And the guitar fade-away bit is a cool way to end it. The smooth jazz in this band is there but never really gets a chance to shine, keeping inflections instead. You know it is there and that’s enough to enhance instead of dominating, but it could use some softer moments. But we are talking about kitties not getting along, so it can’t happen here.

However, it can happen on “Imagine” without even having to do so. And this is where the Mark Christopher Band comes to life without question, with an undeniably awesome sound. This is reminiscent of everything from prog to jazz-fusion and even some avant garde in places. It plays almost like a symphony swirling around the guitar and flute like magic. This all guilds up nicely to boil and then fades-way calmly before coming back for one more round. And he gently kisses the arrangement with that wah-wah effect, like stepping halfway on the pedal just to get a howl out of it. These are not amateur players.

With such a hard piece to follow they rise to the occasion with the token smoky ballad in “Soulful Sinner.” The amount of proverbial soul on this track is over the top. It’s another hot slab of harmonica-fueled blues rock. The kind with huge chops and tons of mojo not to be heard just anywhere anymore these days. His guitar tone must be mentioned on the last song, “Deep Dog” because it goes through all the scales with ease but changes tonal qualities as he moves freely about the neck. There is just something about the way he plays that makes your day. Get some of this band however you can.