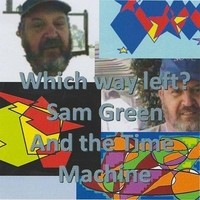 Never let it be said that growing older is an impediment to creativity. Some have said that our imagination, as children, is like a wide tunnel gradually narrowing as we move through life. This, for some, may be true. It doesn’t apply to Sam Green. The Australian born singer, musician, and songwriter began exploring his passions at an early age and has continued to evolve long past the point where other performers and creative spirits fall into staid rehashing and inconsistency. His latest release fourteen song release Which Way Left? is packed with an assortment of tightly composed songs and equally focused performances illustrating how he continues to work at or near the peak of his considerable powers. It’s a bracing reminder of how continuing to pursue one’s passions deep into life can invigorate the heart and engage listeners of any age.

The opener “Dandeong Ranges” sets a mighty tone for everything following it. Green’s weathered vocals might take some getting used to for those more devoted to smooth singers, but there’s a depth of soul in his simple conveyance of the song’s lyric. The spare writing hits just the right note mixing concrete imagery with generalities capable of communicating with any listener. The acoustic guitar is straight forward and the accompanying violin adds an understated melodic touch to the performance. The second song, “Eli”, is an anguished meditation on betrayal with a particularly impassioned vocal, quasi-flamenco style acoustic guitar flourishes, and some cutting mandolin lines further sweetening the stew. His distinctive humor comes through on the song “Google Me” but, as in other similar examples on the album, the humor is always tinged with a touch of melancholy. These are deceptively simple songs transformed by his graceful talent for mixing a variety of emotions and never calling too much attention to the fact.

The sparkling wordplay defining the lyric of “Harry Ginagain” has an almost childlike quality, but there’s the same despair creeping around the edges we hear on the earlier “Google Me”. His gruff, nicotine wracked voice is no impediment to some wonderful phrasing – he never missteps and the twisting vocal lines have an intensely musical quality. The ironic romanticism in the song “I Want to Live in Australia” is also infused with genuine affection. You can hear it in every line of Green’s vocal and the repetitive nature of his lyric never grows tiresome. The rhymes are simple, but the song says much about the performer despite this. “Mist of the Desert” has a slightly ominous air, but he never lays on the mood too thick and there’s a fantastic amount of detail in the lyric that brings it into even sharper relief for the listener. The accompaniment, like every song on Which Way Left?, accomplishes much without ever over-exerting. Sam Green and the Time Machine have likely reached a new peak with this release and there’s a surprising lack of filler despite the extended track listing. This is a powerful artist with an intensely personal edge to his writing that never excludes the listener from his art.