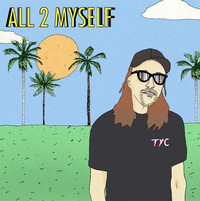 EDM or electronic dance music to some if not many out there is one of those genres that you can get into it, or roll your eyes over and step away from. When it comes to an up-and-comer TyC with his track “All 2 Myself”, that is his genre of choice but are there other elements presented as well. Well sort of it is really hard to tell.

As soon as the song begins you think that this may be a rap or hip hop if not r&b type of track, but are thrown off those genres with the EDM mixture with catching vocal chords to top it off. It is just how the music works for TyC. His vocal work is done really well, it is like the production value was taken into higher quality just for the track itself. The production and quality heard on this song is just flawless.

His vocal chords are sung in a crisp and clear manner, but his ways with the music and it’s lyrics are done in a way, where again you may think he is going to take the rap, hip hop or r&b approach but he sings on a more pop rock level. That is what this song brings to mind is the EDM elements with some added flare of pop rock sprinkled along the top of it. Mix and blend well, is what you get when hearing TyC’s “All 2 Myself”.

The song by itself though is catchy and upbeat. Its tone of beats, keeping a steady yet repetitive rhythm throughout. The vocals sung throughout of course stand on their own, while the music sets the scene up as it were. The music again being very catchy, upbeat, like a overflowing fountain. You get tons of music, vocals, all at once, that you want to stop it yet you let it flow. As this flow overpowers you, as the listener, you find yourself enjoying the song more and more. Even maybe singing along to the lyrics, as they take over, really pulling you into the music more so than you could have ever imagined.

For TyC though, he may be another up-and-comer but he is one with style and grace. His ways with lyrics, music, and vocal work, is really well put together. “All 2 Myself” as a song with such lyrics that describe the feeling for a female, really depicting the emotions that are present and there. You soon find yourself feeling what TyC feels with his ways with his words.

You see how he is able to just bring out everything and make it all come full circle. The emotional energy, pride, and passion TyC has put in himself to create such well rounded and solid work. There is no telling as to where “All 2 Myself”, may just take him. It is a jump start of a sure to be hit, that will play off of the music scene with such determination, TyC will just stand back in amusement of himself.