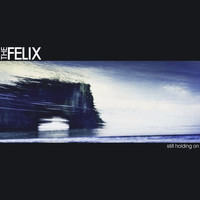 Summer, the time of fun, sun, and heat! Especially the heat! But for the likes of a duo called The Felix, who became a thing during the summertime of 2016, releasing their debut single “Coming Back”. It would follow with a handful of other tracks, catching onto a wide range of services across the net, including Spotify playlists for instance. But that is not all, for The Felix have had their content surpass over one million streams via Spotify alone. Now that alone is saying something or other is it not?

In any case though The Felix have gotten a handful of tracks out and about including most recent being “Still Holding On”. But before jumping into their musical material as it were, here’s some insight into the lifelong friendship of Jeffrey James and Blake Skipper, who had begun producing songs together with one mission. To create something beautiful, from the skeletons in their closets, of influences they had growing up mixed in with personal experiences and experiential storytelling. That said, it takes a conscious combination of electronic synth pop music, thrown in with some indie rock and urban influences, that spans across multiple decades that has built a solid ground for The Felix’s style and sound.

It has made an emotive measured amount of tunes that has allowed for them to connect with all of those who is a lover of all genres. After developing their source of style and sound though, this twosome have been spending the first part of 2017 writing and recording more material, while working said work into their live set and will be releasing even further singles between now and the rest of their career of course.

Going back to “Still Holding On”, though, it takes that combination of genre mixing to create a style of sound, that is very much alike to that of Muse crosses with Coldplay. The melodies of the music at least, sounds a lot like those acts source of style at the most part. Vocalization wise The Felix has vocals that pretty much just glide atop the music than stand out above it. It is not really a bad thing or a good thing, it is just a thing, that works for itself and for The Felix. They have got a unique style of source, that has an upbeat tone, catchy rhythms, with such an appealing source of drive, that it directs the music and vocals, into a happy yet easy going pace of feeling.

In which it brings us to the lyrics and meaning of this track, which is of course a relationship. The song going into the details about the person being stuck inside the moment, of when the two people first connected. Only one of them feeling this way while the other did not feel the same way at least not yet. It has a lot of meaning and heart to it. It brings to mind your own personal love lives you have experienced before or currently experiencing in some sort of way. Having you left asking why am I “Still Holding On”.

Nevertheless though, The Felix’s “Still Holding On”, track is one of those that will surely take this act places, more so than their debut single had done. They will be doing stuff even more so than before, expanding their musical horizons with craft and creativity with little to no issues at all.