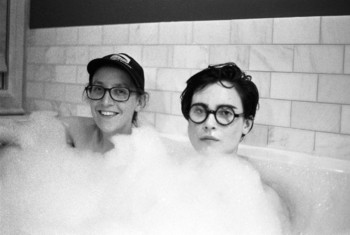 In Search of Lost Time ought to evoke stoned, Sapphic rock. Heavy as a crush, nimble as a thimble, smart as a doctorate, stupid as edible underwear, these 12 songs shudder with wit, melody and the peerless confederation of Josée Caron and Lucy Niles.

None of their influences – not Weezer, Ween, Dinosaur Jr or any of the lesbian superfecta (k.d. lang, Melissa Etheridge, Tegan, Sara) – marry Partner’s craft for singles and their willingness to laugh at themselves – at least not with the same smiling candour. If …Lost Time proves anything, it’s that it’s always more freeing, and probably more fun, to be the butt of the joke. Many of the world’s great rock’n’roll musicians have purported to shamelessness; but were any of the straight, white, male millionaires as balls-out as Partner?