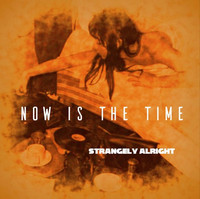 Every since you were a little kid, you were told by adults of all ages, sizes, races, and then some, that drinking, drugs, smoking, and sex were all bad and wrong! Until you would get older only then would you come to the realization, what these things were and if you would go forth experiencing them for yourself. In whichever way you chose of course. For the 60s to the 80s or even present day for that matter, many people have tried or gotten addicted to something or other. For most it would be drugs, if not particularly psychedelic drugs. This case in and point would be the perfect description for the likes of Strangely Alright with their newest single “Now Is The Time”.

A one way trip on a psychedelic drug being music. Which is highly addictive if I do say so myself. Music being the so called psychedelic drug of choice, is by all means not really a bad thing because music of all kinds, makes us all feel good does it not? It has it tune into the melodies, lyrical context, putting our minds, emotions, at total bliss and ease with ourselves and one another as well. That is what happens with “Now Is The Time” by Strangely Alright. This track has Regan Lane showcasing his reflection of goodness. Him having such optimism and gratitude that he’s gone on to create one groovy message he calls hopeful, he says “Every little thing can change the world” he told Cindy Teixeira / Brown Bag Alley / Seattle Wave Radio.

Now how can you not agree with that. We all deep down would like to change the world in some shape or form even if you do not want to admit it. Deep down you would if you had the chance to bring peace and harmony to the little planet we call home and mother Earth, you would want to do something along those lines. If not then so be it, if that is how you want to leave it as then go for it. In any case though, Strangely Alright’s “Now Is The Time”, is one of those songs that just tends to offer up so much in just one single song. It embraces so much faith, confidence, a missive of timeless energy really. We can take what they are disclosing right off the bat. As they want to change the world, with their music and this track, it makes us feel the same way.

The way the track sounds off though is really out there. It uses 80’s synth sound with an interesting hook and lock feature, that directs the music more effectively. Like the hook and lock deal demonstrates the skills of the guitar tactics, while the drumming tone keeps the beats in tune with the guitar and bass lines perfectly. Vocalization-wise Regan Lane has showcased his emotions towards this track with its lyrical content, but his ways with the actual words is really something else entirely.

He just works the words in this manner, that makes those words float accordingly to the musical melody of the track. They give off this melodic sense, of feeling, that you can taste and see the coloring of the music playing through. It makes it become more catching to the eyes and ears, being more upbeat, uplifting, and truly inspirational at that. It’s like as if, Lane has just got this ability of talent that he cannot resist, that he expresses himself so clearly through his artistic ways with music, everything just goes in plan with one another, making it all as he would say groovy.

That is pretty much how this track and it’s back play out. They have got a style they call dream pop, indie rock, with some alternative rock, with groove thrown along the top of it all. You end up with an act that calls themselves Strangely Alright and “Now Is The Time” to check them out.