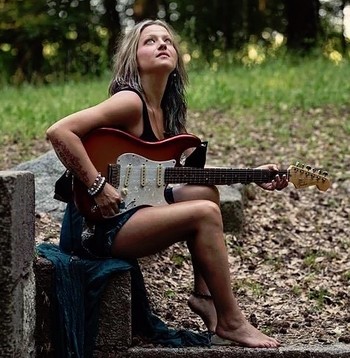 South Carolina native Pam Taylor is locked and loaded and ready to steal hearts with her authentic, heavy-hitting American roots rock sound. After starting the Pam Taylor Band in 2011, Taylor hit the top of the Roots Music and Blues music charts with her debut album, Hot Mess, in 2012 and sold out music halls as a country/blues duo in 2015. Now in 2017, Taylor has overcome health issues and a broken heart, and has redefined herself again as a solo artist with a healing message. She has documented her journey in her upcoming third album, Steal Your Heart, set to release on September 22, 2017.

Growing up in Lancaster, South Carolina, Taylor has seen the highs and lows as a musician and in her personal life. Having formed the Pam Taylor Band, she released her first album in late 2012, Hot Mess, to much critical acclaim. Her debut release hit #1 on Roots Music Report, #3 on Sirius XM BB Kings Bluesville, and #25 on the Living Blues Charts. However, the band broke up before their major tour. She ended up taking guitar lessons from legendary blueswoman, Debbie Davies, and songs poured out of her. After meeting southern rock/country artist, Robert Johnson, who became her life partner at the time, they formed the duo called Stolen Hearts. Together, they released the album, Dirty Southern Soul in late 2015, and they sold-out their CD release show at the Evening Muse in Charlotte.

Taylor garnered numerous accolades over the past several years. She won the Queen City Music Award for Best Female Rock Artist three years in a row (2013-15), and won the 2012 Charlotte Music Awards for “”Best Female Rock Band” and “Best Blues Band.” She also won the 2014 Carolina Music Awards for Best Female Rock Artist. Taylor was also voted Creative Loafing Magazine Readers’ pick for “Best Local Songwriter” and was the cover feature artist for a special Women in Blues Edition of Blues E News Magazine in April 2013. Taylor has also opened for or shared the stage with the likes of Cowboy Mouth, Shooter Jennings, John Primer, Los Lobos, Debbie Davies, and Kofi Burbridge (Of Tedeschi Trucks Band), to name a few.

It was In July 2013 where Taylor hit a health roadblock. She suffered from a ruptured disc in her neck, which left her with a paralyzed left arm and in severe pain. After taking a holistic approach with acupuncture, she was pain-free after a few sessions. Her songwriting then transitioned to more about healing and peace. She eventually split from Johnson in early 2017 and went back on her own as solo artist ready to release her new solo album this fall.

Today, Taylor has found herself stronger and more confident in herself and her music than ever. Jan Marius Franzen of Blues Magazine calls Taylor “the ‘Rising Star’…from the small town in South Carolina [who] is breaking boundaries in several respects. A must have!” Her upcoming album, Steal Your Heart, has the message that loving oneself is the basis for true healing and happiness. Be sure to steal your copy this September!