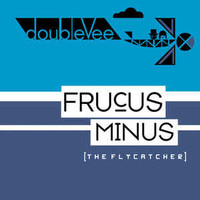 doubleVee first formed in 2012 as the result of intense musical chemistry. Allan Vest and Barb Hendrickson discovered early on they shared an unique connection for writing and performing together; their simpatico relationship with one another blossomed into more and the couple married in October, 2015. Allan Vest is the former longtime songwriting force, front man, and multi-instrumentalist in the indie/orchestral pop band Starlight Mints. The Mints ran for nearly a decade and toured with a number of high profile acts while garnering considerable acclaim for their studio work. Their forthcoming debut album is evocatively titled The Moonlit Fables of Jack the Rider and the first single “Frucus Minus (The Flycatcher)” is accompanied by a fine artistic video remaining open enough for interpretation while still offering specific and compelling imagery. doubleVee are one of the modern artistic units who understand the value of a fully rounded presentation.

The startling drumming opening the track incorporates some unexpected sounds before a massive bass line akin to a burping elephant gun digs a deep and immediate groove for the track. There’s a surprising and understated Lou Reed influence in Allan Vest’s vocals, but he’s a much better singer than Reed ever could be and has vocal chords perfectly suited for this sort of off-kilter pop romp. Barb Vest’s presence is felt along the periphery of the track and she has a voice that matches up nicely with her husband.

A lot of the off kilter effect coming off the track resides with Vest’s electric guitar lines. He approaches melody in a variety of ways and sports a bell-clear tone that plays like a slightly woozy third singing voice in the mix. There’s an impressive mix of elements stewing here, but the aforementioned dominance of the bass seems like it might work against the song. It never does. It’s nothing short of minor genius to hear how this part transforms into the track’s marquee hook and works brilliantly as a result. The lyrical content is a little enigmatic at times, but there’s some sharply observed lines as well that give some kind of focus to the subject matter. Allan Vest’s singing shows a lot of emotional variety – he has steady instincts for altering his delivery as the lyrics demand and the feel for that never wavers. The song’s video is immaculately filled and expands on the songwriting some without ever interfering with listener’s experience with the material. There’s a strong sense of color in the footage that sets it apart from similar short films and has unity with the actual song few efforts in this direction regularly achieve. doubleZee have just enough commerciality to their sound that they are capable of even hooking casual fans in with their offhanded melodic excellence. “Frucus Minus (The Flymaker)” is a wonderfully chosen introduction to the album and the accompanying video for the track further illuminates the intelligence that’s gone into its conception.