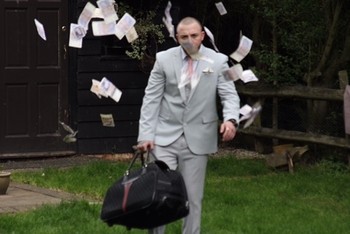 The Only Way Is Up for British rapper Sharpey Major who plans to make music all about money, music and those MAJOR moves.

As well as hitting the touring block this summer Major has a track due for release with Manchester artist Lady Ice, he has according to his social media also been hanging around with Fazer (you know the one from N Dubz).

Sharpey has been producing music since the age of 13, its been a road filled with challenges and grief but he has risen above it all to be the best in the business!

Major whose real name is Jason Pearce is now 26 years old and has progressed rapidly on his sing and song writhing as well as going on tours around the UK.

Sharpey is also currently filming a TV show called Generation Rap in which he travels around music studios in the UK. Its due for release this summer.

The star who seems unstoppable recently told an outlet “The truth is I am no bigger than any other aspiring rapper on the scene, I am just working hard and doing my thing – I am choosing to be in the studio where others go out clubbing”