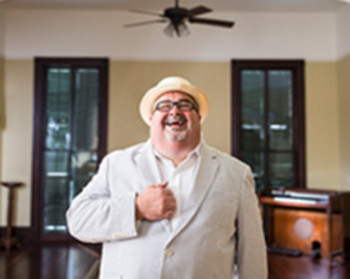 New Orleans-born John “Papa” Gros (pronounced “grow”) has spent more than a quarter of a century behind the piano backing the music of the “Big Easy.” His latest hit “Cocaine and Chicken Fricassee” is a track that blends the raw and hardcore sounds of Rock & Roll, the fun, dance-infused sound of Funk and roots-y Americana into a shape shifting gumbo that carries on the tradition of New Orleans, both honoring its past and helping to shape its future. He’s been a sideman. A bandleader. A front man. A solo artist. A singer. An instrumentalist; the roles have been varied, but the goal remains the same: to honor the music he’s been living his whole life, and to add his own page to New Orleans’ history book.

After beginning his career as an organist and pianist, for George Porter Jr.’s Runnin’ Pardners, during the 90s, Gros formed the funk group Papa Grows Funk in 2000. Inspired by his hometown hero and longtime colleague Allen Toussaint, who passed away while Gros was recording the album, River’s on Fire is John’s first musical release since his former band, Papa Grows Funk, disbanded in 2013. Gros led the charge as the group’s front man, songwriter and organ player. The quintet held down a weekly position for more than a decade at the renowned Maple Leaf Bar in New Orleans. Incorporating the suave sophistication of a jazz quintet with the avant-garde, “anything-goes” spirit of Mardi Gras, Papa Grows Funk released six critically-acclaimed albums, including “Needle in the Groove,” which was co-produced by Toussaint.