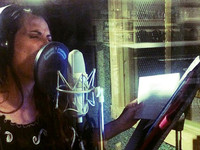 Adult contemporary when this word came across as a genre to me some time ago, it took me a back as to not understanding the genre it was really. For those who don’t know about it, it is pretty much a form of radio played music that is of the popular sense. It doesn’t matter on the genre in question just the “popular” acts upon the radio, TV, maybe even movie scene as well. In this case though it goes to the music category of course, where this artist came from, with her name as Downie Streahl. She has got a new song turned single called “I’m Alright”. So perhaps it will be a hot hit if you catch my drift…..

Any who though, Downie Streahl though is an adult contemporary artist so she is popular but I wouldn’t say she is as popular as a lot of other artists and or bands out there right now. Like her music may be heard on the car radio or online radio at times, but it is likely rare. It is like her style is a mixture of adult contemporary, pop, pop rock, with country pop? Yep as many sub genres that there are in existence so many combinations do exist. Which is why country has added pop to the mix, hence the combo that is country pop, which is what Downie Streahl creates, with the added effect of those other genres mentioned of course.

In which all are used in this new song of hers, you get that glimpse of all that was just said as far as genres go. Her vocal skills though, are the real kicker, she has this moving melody of emotion, that directs the music in a solid flowing of motion, to the beat of the music playing. That in fact has a rather catchy beat to it. It is indeed country music mixed with pop, due to her vocal chords, being very pop based, clear, focused, and powerful. While the instrumental work is done clearly as country pop with that added pop rock flare with the upbeat tone of the guitar riffs, drums, and bass lines, that breathes the music to life.

Now her vocal and instrumental work used throughout “I’m Alright”, is done well. Everything works in the music’s favor of course. But at times the music just tends to lack the energy, it sounds as if the energy is present, but it just doesn’t pop out an expression of reaction that could be more entertaining. Like the song could use a more faster approach, having the melodies be more addressed with feeling of energy. Which will allow the song to be more available to move, having the song take a step into a faster approach, with perhaps more solo work of the guitar, to really guide the music more into a adrenaline pulse if you will.

If this was done then the song could be sounding so much more entertaining to the ear. On its own though the song, does stand well by itself. Vocal chords working well as a full focused piece, as the instrumentals trail behind them. It just brings it altogether, to make a piece of effort, that ignites the pizzazz effect, that makes it unique and flawless.