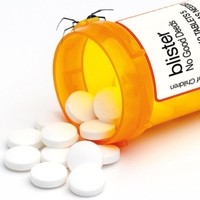 Blister has turned the BIG 2-0 just last year. Now that sometime has passed so has the band of course. They now being of the age at 21, the years will continue to grow just as they do as musicians and individuals as well. In any case though, being together for 20 years, 10 years, less or more it does not matter, it is still quite something to take notice of though. Let alone for a trio act such as this, Blister has come quite a long way. Especially with their latest and newest addition to their catalog of sorts called “No Good Deeds”.

The extensive 19-track album clocks in at almost 60 minutes, rounding off at around 58 minutes with 34 seconds to spare. It is not to say this is a bad thing, the 60 minute even marking would have been nice, but being 58 minutes and 34 seconds in length is quite fair to say the least. Hence, why we are here, with a time span of that length, there has to be so much to discuss if not more than more to be said. Sorry if that got a bit confusing just now. But let us continue, this trio of musicians has taken into account the genre choices they have picked out, which rounds them off to being a garage punk rock metal band.

Which isn’t bad but not very good either. It is more so in the middle if you ask me. Like these genre choices are not bad, they are good, rather very good. In fact, mixing together such a mix-up of tunes makes this album sound even more creative and unique than you would have thought it could have sounded. It is like take opening numbers “Fall Where They May”, “Goodbye Darling”, “Relapse”, and “Sacred Cow”. Not only are the song titles very eye catching and giggle worthy, the material behind them is solid and crafty. Meaning that the material does take the genres mentioned, bringing them to the forefront if you will. As they sound really along the lines of “in-your-face” quality. There is plenty of that progressive, aggression and attitude to uphold within these first set of tracks alone.

While the rest of the album with other noted tracks like “Society”, “Tourist”, “You’re So Lovely”, “Drone”, and “Middle Class Contraction”, bring more of a garage punk rock vibe, than the opening numbers had done with their more addressed heaviness approach and vibe send off. The remainder of the album that is ‘No Good Deeds”, brings the album to a round off point with such tracks as “Pickle”, “Caught in a Pattern”, “Manifest This”, “Yellow Tinted Vegan Girl”, and “Happy Happy Birthday”. Whereas the last portion of the album with the rest of the material, wraps itself up to being a release that is rock solid at best, having the material to back it up, to sound well rounded, focused, with raw emotional energy, pulsing outward to draw in those aggressive centered individuals needing some punk rock edge.