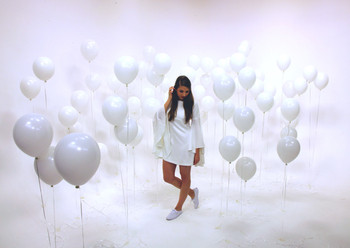 Jess Weimer a former Midwesterner now a West Coast starlit, has had quite the musical journey for as long as she can recall. In fact, she been writing and singing songs, for such a long time that it has lead her to write and record for her debut EP release “Until You Drop”. Thus, Jess Weimer herself has taken some time to discuss this release and her progress with all new music!

NP: Why did you want to take music and run with it as a career choice?

I’ve always been passionate about music/performing, and I’ve known that’s what I want to do as long as I can remember. The final push for me was about a year and a half ago when I had to quit my day job to be a full-time musician. I couldn’t continue to balance the opportunities that were coming in for music after the release of my first music video alongside the obligations of a nine-to-five, so I made the call and I’ve been focusing on music ever since.

NP: What is the story behind the photograph with you surrounded by balloons?

That is a behind-the-scenes photo from the music video from my first single “Telltale Signs”. We filmed it at the YouTube Space, which was a blast. It’s on YouTube if you want to give it a gander, and the balloons will make sense!

NP: What has influenced your sound and style?

Listening to music from the big band and jazz eras growing up has definitely influenced my style. I love artists like Nat King Cole, Billy Holiday, Ella Fitzgerald, and Frank Sinatra. I also appreciate artist versatility because my musical background is so diverse, ranging from musical theater to a bluegrass-fiddle band to chamber orchestra.

NP: What are your songs about? (What specific themes do they cover?)

So glad you asked! I write about themes like body image, inner-conflict, finding love in a partner that accepts you as you are, and topics that have a positive intention or are relatable to audiences everywhere. I’m also currently developing a song that comments on overvaluing of wealth and image in our society. Using my songwriting powers for good!

NP: Do you write your own songs? (Discuss the songwriting process in detail.)

I do write all of my own songs. Typically songs come to me in melodies that may or may not have lyrics associated with them, but I generally edit the lyrics quite a bit in the case that I do hear them with the melody. I hear something in my head, then I make a voice note to record what I’m hearing, I’ll rewrite the lyrics to that part of the song, and I’ll create the remaining parts of the song with lyrics that align with the message. I always go back and fine tune the lyrics and melodies, but that is the songwriting process in a nutshell. Once the song is finished, I take it over to my producers at The Record House (Beto Vargas and Mert Özcan) and they work up some killer production.

NP: How do you describe your music to people?

The sound falls somewhere into the category of jazzy indie pop. I also say I write music with a message since the topics and lyrics of my songs are so important to me.

NP: What can you tell me about your EP “Until You Drop”, that has not already been said about it?

“Until You Drop” is something you can easily play on repeat. Each song is catchy yet unique, which means you can find the EP on Spotify, click the “Repeat” button once, then sit back and enjoy the vibe.

NP: How does it feel to have released your debut EP, what comes to mind?

It feels like I’ve just begun a new chapter in my life and it’s starting to get really exciting. I’m so thrilled and proud to have created such an awesome EP with the guys of the Record House and I know that we’re just starting to get to the good part. “Until You Drop” is the first out of many great milestones that have yet to come, and I can’t wait to see where it goes.

NP: What is your favorite song on the EP and why?

I love them all so much! They’re different and close to me in unique ways (excuse me for a second while I sound like a mother of four). That being said, “Until You Drop” is the title single of the EP for a reason. It really packs a one-two punch with brooding melodies and a powerful message. Body image is such an important subject that we need to continue to confront. Eating disorders and self-loathing should not be an acceptable social norm.

NP: What was the writing and recording process like for this EP?

I mentioned my general songwriting process earlier, so I won’t be a broken record here and repeat myself, but for the title single of the EP (“Until You Drop”) I was feeling pretty frustrated with how standard it is for everyone to be dissatisfied with their body image. Then the chorus came to me. I showed the song to my producers when it was finished and they were really excited about it. They helped me find the sound for it that combined hauntingly captivating production with live instruments and vocal layers.

NP: Why do you think people should check out your EP “Until You Drop”?

I really think the topics of the songs will resonate with people and the melodies will get them tapping their toes. The diversity of the songs will keep you intrigued, and they might get stuck in your head, but I’m willing to bet you won’t mind.

NP: What does this next year have in store for you?

I still am figuring that out but I know I’m writing new music as we speak so most definitely keep your eyes peeled for a release of singles or another EP for now it’s still a mystery.