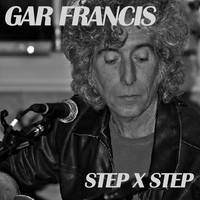 Where to begin when it comes to an artist like Gar Francis. He goes back, way back when to being born and raised in Plainfield, New Jersey for one. For another, as a child, his earliest memories came from getting out of the house, with his father every Sunday, listening to music, such as Chairman of the Board and Frank Sinatra, on the William B. Williams WNEW radio show. That would later him have his relatives playing their own instruments doing cover songs here and there. Which would later lead him in the 1960’s time frame to start his first band ever, Romeo, Red, Ripper, and Rufus which played instrumentals at his Catholic school graduation parties. When the nuns caught on to this they tried to put an end to this raunchy rock & roll band driving the Christian girls wild. As time progressed so did Gar Francis by the 1970’s it brought on a whole new band and had Gar wanting to write his own original music. He would then form The Rockids who were a regular at CBGB’s and Max’s Kansas City in Manhattan sharing a stage with The Ramones, Blondie, Talking Heads, The Shirts, Roger McGuinn and many other New York upstarts.

Times would continue to rotate passing right along, and by the 1980’s more music creations from good old Gar came about. He would take some time away from live performances, focusing on song writing only. Taking a job to make some income, just taking in the audience from the backstage listening and watching numerous other acts coming through. He would go on to perform in other bands as the years moved onward. Sometime later, the band he was with at the time, would change their name to Ricochet and become quite the hit locally. Gar’s first song for the band “ Baby It’s You” became a local hit and the band was asked to play one of the first MTV live broadcasts from City Gardens in Trenton, New Jersey and a spinoff of American Bandstand the TV show “Dancing On Air” in Philadelphia. This was also the time when Gary became Gar Francis. Being the master of the game Asteroids he would put GAR in the high score spaces and Francis was chosen for his father’s love of Francis Albert Sinatra music.

All of this being said and done, Gar would continue through the years, to create and write music from various songs, bands, and other projects. In fact, his most recent song would be one called “Step X Step”. The track being very basic, mellow rock. It maintains a decent rhythm for it, having the vocal chords trail right along with it. While the instrumentals played front and center, moving atop the vocal range, as the song played itself out. The vocal work being decent enough, the song enjoyable. Really nothing more or less to be said about the song, vocals, or instrumentals really. It just all works well together, as a full on piece of material.

Gar Francis as a musician is something out of the ordinary, as his style is rather unique, and interesting, as he has had so much skills with music creation over the span of his musical career, it is hard not to enjoy his works. He is just that good at what he does, which is music making, performing, if not more so than those things alone. “Step X Step”, is an track that you can hear every so often that it becomes more fun and interesting enough to smile too.