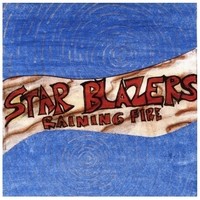 You don’t come looking at punk rock for musical proficiency or songs that don’t have mistakes. If you come here looking for that, you will be sorely disappointed. This is unapologetically imperfect. It’s also quite strong for fans of punk rock.

The guitar sound starting the opening “Don’t Let It Rain” is just plain mean. The tune is slow, but punky. This is sort of along the lines of things like DOA. The next one (“How’d I Ever Live”) is more along the lines of the Ramones. Either way, it’s solid, rough around the edges, unpolished punk rock.

“I Got a Feelings” seems even more like The Ramones. I like the raw old school rock and roll edge to this. The shouted lines on the chorus are a nice touch, too. They throw a weird little bit into it that’s almost prog rock, too.

Mainstream rock merges with punk on “Burning Wheels.” It is one of the more “different” pieces here, and is rather effective. “Take Me Down” is the final song of the set. On the one hand, I’m not sure about the wisdom of closing on a slower ballad. The other way of looking at it is that it provides a bit of a cool down. Either way, it works pretty well.

I’d say that overall this is probably closest to the kind of sounds The Ramones made popular. You won’t mistake these guys for The Ramones, though. Nor will they give them any real competition. The Ramones are no more, though. So, if you want some current music that upholds those traditions, this is a good place to look.